French President Hollande: Saint-Denis Raid Proves We Are at War With ISIS 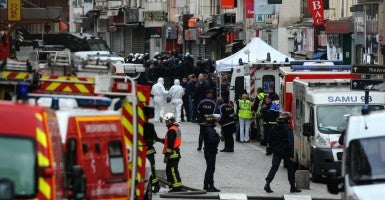 After a dramatic seven hour gunfight in a residential building, two terror suspects have been killed and seven others wounded and captured. One man, yet to be identified, was shot dead by police.

A woman, thought possibly to be the cousin of Abdelhamid Abaaoud—the assumed ringleader of the Paris attacks—blew herself up with a suicide vest.

Five police officers received minor wounds and one police dog was killed. The operation is over and the area is secured.

It was initially thought that Abaaoud conducted the attack from Syria. However, French security sources have told the media that recent phone surveillance and testimony helped authorities determine that he is, in fact, in Paris. The same phone surveillance and testimony also led French authorities to believe that another major attack in Paris was imminent.

The location of the raid is no surprise. Saint-Denis is a relatively poor suburb of Paris. Saint-Denis is also home to a sizable immigrant population and an estimated 20 percent of the population is of North African descent. It is worth pointing out that Abaaoud is a Belgium of Moroccan descent so he would have felt quite comfortable holding up in the area.

Saint-Denis was one of several hotspots during the infamous 2005 French riots which saw hundreds of cars and several government buildings burned by local immigrant groups. The location of the police raid is not far from the national stadium Stade de France—one of the main targets in last weekend’s terrorists attacks.

This raid comes on the same day that two Air France planes, originating from the U.S. and travelling to Paris, had to make emergency landings due to bomb threats. Thankfully, these were false alarms and no bombs were found, but the incidents, along with the raid, shows why France and her allies need to remain vigilant.

French President Francois Hollande announced that the police raid in Saint-Denis is proof that “we are at war” with ISIS. The question is: what is France going to do about it?