How Michigan’s Welfare Population Declined by 70% in 4 Years 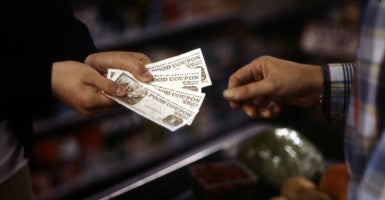 The number of welfare recipients in Michigan dropped below 65,000 this year. (Photo: Dennis Brack/Newscom)

Since Michigan Gov. Rick Snyder assumed office, the number of welfare recipients in the state has declined by a staggering 70 percent, according to a news report.

Michigan Capitol Confidential, a news site, reported that the decline in welfare recipients could be due to new enforcement of limits on cash benefits. The state has begun enforcing a 48-month lifetime limit for its cash assistance program and a 60-month federal time limit.

The spokesman for the state Department of Health and Human Services, Bob Wheaton, partially credited the drop in welfare recipients to the state’s improving economy.

In an email to Capitol Confidential, Wheaton said: “As the governor said at the time of the decision to enforce time limits, this was returning cash assistance to its original intent—a transitional program to help families as they work toward self-sufficiency while preserving the safety net for families most in need.”

During Snyder’s time in office, the state’s economy has improved, and unemployment has decreased. The unemployment rate in Michigan dropped from 11.2 percent in December 2010 to 5 percent in September 2015.

The Capitol Confidential, or CapCon, is affiliated with the Mackinac Center for Public Policy, a free-market think tank in Midland, Mich. James Hohman, the center’s assistant director of fiscal policy, told The Daily Signal:

Michigan’s economic recovery puts it among the nation’s leaders. The growth has pulled people out of poverty and is causing less demand for the state’s safety net programs.

An environment that promotes growth in the Michigan economy remains a top priority of the Snyder administration. To continue growing the Michigan economy, the fiscal year 2015 budget includes $344.2 million for economic development and $427 million for workforce development to assist Michigan businesses and communities, with a continued emphasis on talent, business attraction, and community revitalization.

“Welfare should promote self-sufficiency for able-bodied adults,” Rachel Sheffield, a policy analyst at The Heritage Foundation, told The Daily Signal.  “A crucial aspect of achieving this goal is a work requirement: Able-bodied adults should be required to work, prepare for work, or look for work in exchange for receiving assistance.

“Welfare is available for those who truly need it,” she said, “but the ultimate goal is self-sufficiency.”