Students Across US Demand Free College, Stumble Over Who Will Foot the Bill 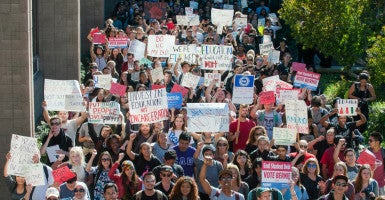 Hundreds of students march down North Hall on UCSB during the Million Student March on Nov. 12. (Photo: Kenneth Song/News-Press/ZUMA Press/Newscom)

Students swarmed college campuses across the nation Thursday to rally against the rising costs of higher education, demanding free college tuition, the zeroing out of student debt, and a $15 minimum wage hike for campus employees.

The protests, which spawned from a social media movement called the Million Student March, hit 110 colleges throughout the U.S. and quickly rose as a top trending topic on Twitter.

The grassroots group said it was uniting to fight for education as a “human right,” citing analysis that found that the average class of 2015 graduate who took out a loan for a bachelor’s degree has more than $35,000 in debt.

“Education should be free,” the group’s website reads. “The United States is the richest country in the world, yet students have to take on crippling debt in order to get a college education.”

But how the group proposes to pay for the plan is unclear.

Keely Mullen, one of the national organizers for the Million Student March, struggled to outline a funding strategy after Fox Business Network anchor Neil Cavuto asked who exactly would “pick up the tab” for the group’s proposed provisions.

“The 1 percent of people in society that are hoarding the wealth and really sort of causing a catastrophe that students are facing,” Mullen initially responded.

Cavuto noted that those who fell into that category recently saw their taxes rise to about 40 to 50 percent of their income, asking how much more Mullen believed they should pay.

The question commanded the rest of the 9-minute interview, but Mullen was unable to offer a concrete reply other than to argue that the tax rate should continue to rise “until we have a system where not one in two families are threatened with poverty.”

Mary Clare Reim, a research associate at The Heritage Foundation, pointed to economist Milton Friedman’s coined phrase, “there’s no such thing as a free lunch,” noting that college tuition will always come with a price tag because it is a service.

“The question is who pays and how much,” Reim said.

The reason tuition rates have skyrocketed, she continued, is because of the steep increase in federal student loans, which have encouraged colleges and universities to raise their prices.

“When students are not paying for their tuition, colleges have no reason to offer competitive or even realistic prices,” she said. “Instead, the federal government has made a promise to offer student loans regardless of tuition costs, which is why we are seeing this unprecedented cost of a college education.”

She added that offering every student in the country free tuition as the Million Student March proposed would drive the U.S. further into debt, “leaving our economy so weak that there would be no jobs for all of these students we just paid to educate.”

“Calling tuition free college a ‘right’ and demanding someone else pay for your education will do you no good if that right can’t use your education to get a job and contribute to the economy.”