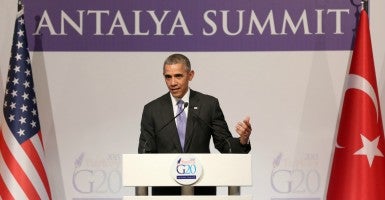 President Barack Obama defended his remarks that ISIS has been "contained" during remarks to the press in Turkey on Monday. (Photo: Depo Photos/ZUMA Press/Newscom)

President Barack Obama said during a press conference in Turkey on Monday that his administration has “the right strategy” on ISIS, and “we’re going to see it through.”

“What I’m not interested in doing is posing or pursuing some notion of American leadership, or American winning or whatever other slogans they come up with, that has no relationship to what actually is going to work to protect the American people. I’m too busy for that,” the president said.

A series of coordinated attacks left more than 120 dead and more than 350 injured in Paris on Friday evening. French and U.S. officials have said the attacks were perpetrated by ISIS terrorists.

Obama pointedly talked about those who disagree with him, saying, “I can’t afford to play some of the political games that others may.”

He also appeared to take a shot at Sen. Ted Cruz, R-Texas, although he didn’t name him:

When I hear folks say that, well, maybe we should just admit the Christians but not the Muslims; when I hear political leaders suggesting that there would be a religious test for which a person who’s fleeing from a war-torn country is admitted, when some of those folks themselves come from families who benefited from protection when they were fleeing political persecution — that’s shameful. That’s not American. That’s not who we are. We don’t have religious tests to our compassion.

Cruz had on Sunday pushed for “Muslim refugees from Syria to be barred from entering the United States but opening the borders to displaced Christians,” reported The Washington Post, which also quoted Cruz as saying, “There is no meaningful risk of Christians committing acts of terror. If there were a group of radical Christians pledging to murder anyone who had a different religious view than they, we would have a different national security situation.”

Obama said that the United States can accept refugees while ensuring our own safety.

“We also have to remember that many of these refugees are the victims of terrorism themselves—that’s what they’re fleeing,” Obama remarked. “Slamming the door in their faces would be a betrayal of our values.”

The president has faced criticism for saying that ISIS has been “contained” in a taped interview with ABC News regarding the death of Jihadi John that aired shortly before the Paris attacks.

Asked if he had “underestimated [ISIS’s] abilities,” Obama responded:

So when I said that we are containing their spread in Iraq and Syria, in fact, they control less territory than they did last year. And the more we shrink that territory, the less they can pretend that they are somehow a functioning state, and the more it becomes apparent that they are simply a network of killers who are brutalizing local populations.

That allows us to reduce the flow of foreign fighters, which then, over time, will lessen the numbers of terrorists who can potentially carry out terrible acts like they did in Paris.

Nile Gardiner, the director of the Margaret Thatcher Center for Freedom at The Heritage Foundation, told The Daily Signal that Obama’s remarks “offered absolutely no leadership vision whatsoever.”

Obama’s remarks were “defiant, arrogant, and imperial in tone,” Gardiner said, and he “offered no ideas or proposals for combating the ISIS threat.”

The president “has no strategy” on how to combat ISIS, Gardiner argued, and therefore had “nothing to say except to condemn his critics at home, who he seems to think are his biggest enemy at the moment.”

Gardiner added that French President François Hollande “has shown more leadership in the wake of the attacks” than the president has, which is “a damning indictment of the lack of American leadership.”

The attacks in Paris occurred the day after a U.S. drone strike killed Mohammed Emwazi, an ISIS terrorist known as Jihadi John.

Following the attacks, the City of Light implemented its first mandatory curfew since World War II. France has also closed its borders.

One of the victims has been identified as an American. Nohemi Gonzalez, 23, a student studying abroad in Paris, was killed during the attacks.

In January, the headquarters of a Parisian satirical magazine, Charlie Hebdo, fell victim to Islamic extremism after publishing cartoons of the prophet Muhammad, among other political and spiritual leaders. Twelve people were murdered.