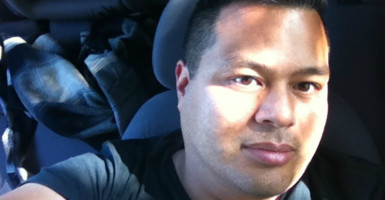 Dustin Siggins is the D.C. correspondent and public relations officer for LifeSiteNews, and is a co-author of the forthcoming book "America's Bankrupt Legacy: The Debt-Paying Generation." He is a Heritage alum, having been part of the Young Leaders Program in 2008, and a research assistant in 2010.

For many conservatives, the first four names—Americans who have faced state-sanctioned discrimination for trying to live in accordance with their religious beliefs about marriage—bring strong opinions about America’s deteriorating state of religious liberty.

However, it is Lopez who may be America’s most persecuted pro-family advocate—even as some pro-family and conservative leaders have declined to take up his cause.

Last year, the radical Human Rights Campaign (HRC) targeted Lopez–an associate professor of English and classics at California State University Northridge (CSUN)—as part of the so-called “Export of Hate” because of his international advocacy on behalf of children and against redefining marriage.

A bisexual man raised by lesbians, Lopez told The Daily Signal in 2014 that the HRC’s efforts have left him feeling “completely isolated,” as well as “having to worry every time I leave my home—and my wife is there with the newborn—and not knowing whether I’m going to get killed, it’s really hard.”

This past June, things got worse for Lopez: He found out that CalState administrators had spent eight months building a case against him for the crime of giving students an optional assignment to present at the Reagan Library, as well as for allegedly retaliating against students who disagreed with his conservative views on family and the rights of children.

In October, the newly tenured professor—a status earned just two years ago—was found guilty of retaliation against a student. This is a decision that could lead to his dismissal.

“The Office of Equity and Diversity first claimed that I discriminated against a heterosexual female student and a gay male student by offering them two options to fulfill 20 percent of a course grade,” Lopez told The Daily Signal in a recent e-mail. He added:

One option was to write ten responses to the reading, an assignment I currently give out in all my classes. The other option was to prepare a research exhibit and display it at an all-day conference at the Reagan Library; it was the Reagan Library option they found ‘harmful’ because they were exposed to and had to sit next to conservatives while they ate and listened to lectures.

That conference was called “Bonds That Matter” and promoted traditional views on marriage and family.

“The gay male student was exposed as a fraud early on. That left the heterosexual woman, whose claims were subjected to a long and expensive investigation that ultimately ended up vindicating [me],” explained Lopez.

While the initial investigation revealed no wrongdoing, the campus is now claiming that Lopez retaliated against a student who reported him to the university—something he says is bunk because the student in question received an “A” in his class, she was not entitled to an award administrators claim he prevented her from getting, and “all the ‘evidence’ supporting the complainant’s retaliation claim was undocumented memory.”

Zero of three CalState administrators contacted by The Daily Signal about their targeting and persecution of Lopez responded to requests for comments. However, a spokesperson who was forwarded the e-mail told The Daily Signal that the university has done no wrongdoing in its investigation.

“CSUN is fully committed to upholding academic freedom and free speech, as well as the right of our students to bring forth concerns. Any investigation resulting from student complaints follows established CSU protocol and is conducted on the basis of determining whether or not there has been a violation of university policy,” said spokesperson Carmen Chandler.

In a disposition given to Lopez, the university claims that he was investigated only once charges were formally filed in May, by students who were graduating. However, the disposition also notes that “the facts surrounding [a female student’s] allegations … were similar to the allegations made” by two students “about the conference just days after it took place on October 3.”

Lopez says this means the investigation started last year—in violation of the campus’ policy to complete investigations “no later than 60 working days after the intake interview,” with a 30-day extension if necessary.

“We take issue with the accuracy of the allegations currently circulating relating to this investigation, but as this is a confidential personnel matter that involves confidential student information, we cannot discuss or disclose the details,” said the campus spokesperson.

Why is Lopez being targeted by university administrators? Lopez says it “is a complicated question,” and that he “faced resistance at the university due to my service in the U.S. Army Reserves, my prior work with national security, and my authorship of a 2011 book called ‘The Colorful Conservative.’”

Lopez, who says his view that “children have a right to a mother and a father” especially angered some liberal activists, thinks that outside groups may have worked with his students. “There was a mix of their own intense rage at me over my views and the real political pressure applied to them by outside groups,” he explained, saying that he has “no real gripes against the students, because I know they were weaponized by off-campus groups.”

Lopez says the latest charges may simply be administrators attempting to save face. In a letter to the university, his lawyer accused administrators of making a “purely political and ideological attack on Dr. Lopez for holding—and exposing his students to—ideas about children’s right[s] in the context of family and reproduction which are apparently unpopular at [CalState].”

Lopez considers the right to natural parents—a life circumstance he was denied growing up—so important that he and several other people raised by same-sex couples filed an amicus brief with the Supreme Court on behalf of children…and against redefining marriage. He has also publicly criticized IVF, a process some same-sex couples use to have children, saying it denies children the right to natural parents.

This month, CalState’s targeting of Lopez finally received the attention it deserves, with stories by Campus Reform, The Daily Caller, and other outlets, including a link from The Drudge Report. Lopez said he hopes that “the conservative movement can find a way to fight for people like me.”