Paris Terror Attacks: Time for Leadership and Resolve in the Face of Evil 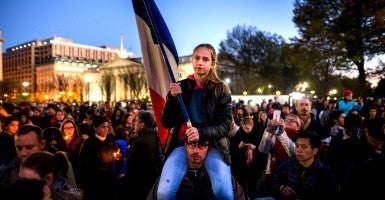 Lucie Warga waves a French flag during a solidarity rally outside the White House in tribute to the victims of the Nov. 13 terrorist attacks in Paris. (Photo: Jim Lo Scalzo/EPA/Newscom)

Friday’s brutal and barbaric Islamist terror attacks on several locations in central Paris have been described by French President François Hollande as “an act of war that was waged by a terrorist army, a jihadist army, by Daesh (Islamic State), against France.”

So far, at least 129 people have died from the attacks, with the death toll likely to rise further, with over 350 injured. According to the Paris prosecutor, François Molins, the ISIS assault on Paris was carried out by “three teams of coordinated attackers.” ISIS has already claimed responsibility for the terrorist attacks on social media.

According to media reports, one of the suicide bombers whose body was found outside the Stade de France soccer stadium had a Syrian passport. A Greek official has stated that the Syrian terrorist entered Europe via Greece in October, as a refugee. Another of the terrorists possessed a French passport and had known links to ISIS.

The Paris attacks are consistent with the kind of mass-casualty attacks that have been carried out in the past by Islamist terrorists in London, Madrid, Istanbul, and most recently in Paris itself, with the Charlie Hebdo massacre in January this year. They also came in the wake of last week’s explosion on board a Russian airliner flying from Egypt to St. Petersburg, which U.S. and British authorities believe was a terrorist attack.

The barbarism and carnage on the streets of Paris are a stark reminder that the free world is at war with brutal terrorist groups who seek to sow death, fear, and destruction in the West. This is a moment for robust and bold leadership from leaders on both sides of the Atlantic, who must be prepared to emphatically defeat the enemy we face.

It is important at this moment that the forces of freedom be united and determined in their efforts to destroy the Islamic State, which must begin with the eradication of ISIS from Iraq, where Kurdish forces are bravely fighting to retake territory from the Islamic State.

The United States and its allies in Europe, the Anglosphere, and the Middle East must be prepared to take the war to the enemy, as part of a global long war against Islamist terrorism and extremism.

It is also time for an end to the Obama White House’s approach of “leading from behind” on the international stage. The Obama administration needs to present a clear-cut, overarching strategy for defeating ISIS and aggressively confronting the Islamist threat.

As British Prime Minister David Cameron declared in a Downing Street press conference on Friday, following the successful killing of ISIS terrorist Mohammed Emwazi (Jihadi John) in Syria, “Britain and her allies will not rest until we have defeated this evil terrorist death cult, and the poisonous ideology on which it feeds.”

Strength and resolve are the only message that our enemies understand. And this must be backed by increased investment by the United States and its allies in military capability, strengthening the ability to project force across the world to protect and defend our vital national interests against those who seek our destruction.