Can Opposing Same-Sex Marriage Get You Fired at Marquette University? 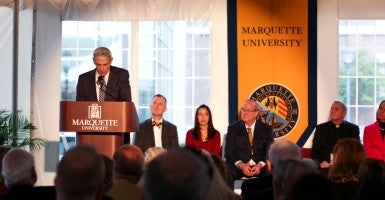 The long-time Marquette University political science professor at the center of one of the most controversial academic freedom cases in higher education continues to wait for a faculty hearing committee’s decision on his professional fate.

Marquette has said it intends to fire McAdams because of his blog post a little over a year ago criticizing a student teacher for prohibiting a philosophy student from sharing his opposition to same-sex marriage in the class.

The faculty committee, which held a hearing into the matter in September, has 90 days to make its recommendation on whether McAdams should stay or go.

McAdams said such legal action would “be tremendously expensive, although the people running Marquette may be stubborn enough that they are willing to spend up into six figures of Marquette’s money to try to get rid of me.”

Bottom line: As of Thursday, it was all still very much up in the air.

McAdams is a nationally respected political science professor who has called Marquette his academic home since 1977.

The Marquette administration has sought to evict McAdams, a conservative who has long been a thorn in the Jesuit school’s side, criticizing its policies and teaching methods.

McAdams stands accused of violating the university’s “Guiding Values and expectations of conduct toward each other and nothing to do with academic freedom, freedom of speech, or same-sex marriage.”

“Debate and intense discussion are at the heart of who we are as a university, but they must be balanced with respect,” Brian Dorrington, senior director of university communication, wrote in an email to Wisconsin Watchdog in late March.

McAdams has been on paid suspension and ordered to stay off campus since November, when he blogged his criticisms about the graduate student teacher.

In early February, the university began the process to terminate his tenure.

McAdams revealed his pending firing on his blog, posting a copy of a letter sent to him by Richard Holz, dean of the Marquette University College of Arts and Sciences.

The 15-page letter, dated Jan. 30, noted that the Milwaukee Jesuit school’s “objectives are understood against the backdrop” of its Catholic mission and vision.

McAdams acknowledges that private universities can prohibit certain speech, but they have to abide by the rules they make.

“Marquette’s statutes, which are explicitly incorporated into our contracts, provide strong support for academic freedom, really as strong as what exists at (the University of Wisconsin-) Madison, where the First Amendment applies,” he told Wisconsin Watchdog in September. “They in essence have guaranteed academic freedom contractually.”

Marquette’s campaign to revoke McAdams’ tenure landed the university on the Foundation for Individual Rights in Education’s “10 Worst Offenders of 2014” list.

“Marquette’s disregard of due process and its incredible denial that its campaign against McAdams’s tenure implicates free speech or academic freedom in any way should frighten anyone concerned about faculty rights,” the foundation wrote in a piece published in March in the Huffington Post. “Indeed, if the university succeeds in removing McAdams, free speech and academic freedom will lose whatever meaning they had at Marquette.”

Even as he faces the threat of losing a post he has held for nearly 40 years, McAdams remains an outspoken critic of policies and actions that trample on academic freedom and free speech, not just at Marquette, but in higher education across the country.

He pointed to the turmoil at the University of Missouri. Amid massive protests on racial unrest at the university, there have been multiple incidents that have threatened if not violated First Amendment rights. While McAdams said reports of actual threats of violence should be taken seriously, he noted that campus police, prompted by the far more powerful politically correct cops, fired off emails to faculty and students advising them to report any comments deemed “hurtful.”

“I think we all know that ‘hurtful comment’ is anything the politically correct types disagree with,” McAdams said.

He added that the Marquette administration finds no fault in those who argue for gay marriage.

McAdams said the left has made “offensive speech” anything it disagrees with.

“If you say something that’s just politically incorrect, they want it shut up,” the professor said.