Leap of Faith: This Christian Inmate Rehab Program Boasts a Recidivism Rate of Only 10 Percent 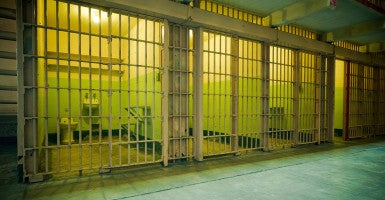 'Most are coming out more desperate and more alone': Men of Valor aims to help inmates successfully re-enter society when they leave cells like these. (Photo: iStock)

NASHVILLE, Tenn.—Ron Vaselech estimates he has spent close to 30 years in prisons across the United States.

Time has taken its toll on the kind, soft-spoken man who is originally from Ohio. He wears oversized, Coke-bottle eyeglasses and a sleeveless shirt, exposing weathered tattoos. He looks older his 56 years.

“I stole things, and I took things, to supply an addiction,” Vaselech says in an interview with The Daily Signal, referring to offenses that landed him in penitentiaries in Pennsylvania, Indiana and, finally, Tennessee. “I knew God, but I didn’t use him in my everyday choices. I was lost in drugs and alcohol and all the twisted thinking that could possibly happen to a young man growing up.”

Vaselech, an only child whose parents died in the 1980s, says he began experimenting with drugs at age 15 and spent years living on the streets.

At the peak of his addiction, he estimates, he was drinking a gallon and a half of vodka per day.

Last year, while incarcerated at the Metro-Davidson County Detention Facility in Nashville, Vaselech enrolled in the Jericho Project, a rehabilitation program run by a Christian organization called Men of Valor.

Although the national recidivism rate hovers around 70 percent, offenders who enroll in Men of Valor programs return to prison less than 10 percent of the time, according to statistics provided by Men of Valor’s program director, Curt Campbell.

“There’s AA and NA and everything else, and I’m not trying to knock those programs,” Vaselech says of the long-established Alcoholics Anonymous and Narcotics Anonymous. “But for me, they never worked. [At Men of Valor] you’re focused on God, and on living a good life. I’ve learned a lot that has made me enjoy life without a padding, without a drug, or without alcohol, and how to deal with my problems.” Some of the participants in the Men of Valor ministry. (Photo: Curt Campbell/Men of Valor)

Men of Valor, a 501(c)(3) nonprofit, has been called the “most successful prison reform program in Tennessee history” by the state’s news outlets. As of June, Tennessee was operating its prison system at 98.5 percent capacity.

Ex-convict Carl Carlson founded Men of Valor in 1997. Today the organization offers mentoring and classes for inmates as well as re-entry assistance for released convicts. It operates through a partnership with the Corrections Corporation of America, one of the nation’s largest privately owned and managed corrections enterprises.

Men of Valor gradually expanded to programs in three CCA prisons in Tennessee, which runs 13 state prisons. Men of Valor leaders expect to be in a fourth prison by year’s end, and have plans to build a $7-million transitional campus for men enrolled in an Aftercare Program.

Praised as a “giant in the world of prison reform,” founder Carlson died last year at 67. He already had passed the reins to a group of men he recruited from the l Nashville community and, in some cases, from his own prison programs.

“Most of us sit in our living room at night, watching the news, and when we see a guy got arrested for a crime, we say, ‘Hallelujah,’ we don’t have to worry about him anymore,” Campbell, a former YMCA coach who has worked for Men of Valor since 2005, tells The Daily Signal.  “Well, 98 percent of these guys are coming out. And most are coming out more desperate, more angry and more alone than they’ve ever been.”

By Campbell’s estimate, the odds of a convict staying out of prison without significant assistance after being released are “slim to none,” Campbell says, and “it’s a no brainer” most will break the law again.

“You walk out of prison and you’ve got no place to go, no job, [perhaps] no birth certificate, it’s crazy,” he says, even for “a guy that really wants it.”

Men of Valor’s Jericho Project, which Campbell describes as “a relationship ministry,” focuses on reaching men while they are incarcerated and working to maintain that dialogue throughout their re-entry into society. He says few other prison ministries work with men both in and outside prison.

While behind bars, Jericho Project inmates live in a separate housing unit and participate in a highly regimented system of programming. It includes one-on-one mentoring with Men of Valor staff, Bible study and classes on topics such as manhood, fatherhood and “victim impact,” a look at first-hand accounts of the repercussions of criminal activity.

“There are no easy fixes here,” says Ken Leary, a prison minister who meets with four to five men a week. “In our society, there’s an isolation, and we’re made for relationships.”

The program, Leary says, shows men “how to better relate to God, to one another, and to themselves.”

Newly released inmates participate in a year-long Aftercare Program, which includes activities  five days a week. The men live together in Men of Valor apartments, attend classes three days a week, and work two days a week through one of the ministry’s local partners.

“We teach these men to be relentless in pursuing the Lord,” Tommy Mathis, whose title is aftercare minister,  says. “To overcome all of the pulls [they are up against], I’m not sure words can describe that challenge.”

‘How Things Are Going to Change’

Campbell explains Men of Valor’s impact as a ripple effect.

“For every 100 guys we work with inside the prison, I’m going to say probably 25 to 30 really want, to some degree, what we have to offer,” the program director says. “Out of those 25 to 30, probably 12 to 15 will really pursue aftercare, and then we’ll have five to 10 who actually complete a full year with us on the outside.

The “deal,” Campbell says, is that those five to 10 men not only stay out of prison but become conduits for change within their own neighborhoods.

Given that the largest indicator that someone will enter prison is having a father in prison, he says, this is where the cycle of imprisonment can be broken down. Indeed, 75 percent of Men of Valor enrollees are fathers.

“We’re a discipleship ministry, and we think that that’s how things are going to change,” Campbell says.

One goal, he says, is to grow to a point where the ministry produces 50 to 60 men a year “who really want something different for their lives” after prison, “who are going to change the culture, starting with their families, their neighborhoods, and then, by working with us, eventually go back into the prison to change the population there.”

Chad Daniels, an aftercare minister who was incarcerated before enrolling in Men of Valor programs, now spends his days working with men in its re-entry program.

“It didn’t take long for me, once I was in prison, to say, ‘This is not the life I want to live,’ ” Daniels recalls, but for him it took Men of Valor’s help “to change the heart.”

“[A]nd now, I do feel good that I have a part in helping reshape and rebuild other men’s lives.”

Campbell acknowledges more work needs to be done to reach greater numbers of willing inmates. He calls the,  Men of Valor operation a “small splash in a huge sea of craziness.” But he remains optimistic.

“This spring we’ll be breaking ground on the campus,” Campbell says of the aftercare center and residence. “We’ve already bought the land, and we’ve got $3 million raised toward it. Hopefully within a few years, we’ll be housing 100-plus men.”

When pressed further on the impact of Men of Valor, he turns back to his faith.

“If we can train guys in a year who can just double themselves, whether it’s with their kids, or an uncle, or an employee, whoever, that process will change the world,” Campbell says.

“And wouldn’t it be just like God to revive the morality of America through the prison system?”