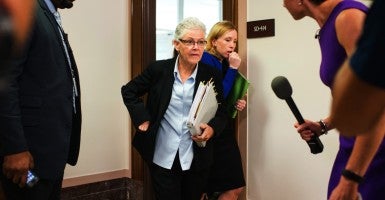 Critics of the Environmental Protection Agency’s Clean Power Plan say the new regulation will cost up to $292 billion and potentially raise electricity prices in 47 states.

“States should be braced to pay higher costs,” said Laura Sheehan, senior vice president for communications for the American Coalition for Clean Coal Electricity. “Consumers only lose in the Clean Power Plan.”

The numbers came from NERA Economic Consulting, a firm based in Boston that said it used state-of-the-art economic modeling to get its results.

In an email to Watchdog.org, EPA officials disagreed with the NERA study, which was funded by the American Coalition for Clean Coal Electricity, which is dead-set against the Clean Power Plan.

“EPA has not reviewed this report,” the agency email said. “EPA’s extensive analysis shows that the CPP is effective, achievable and affordable.”

The EPA has estimated that the CPP will cost $8.4 billion but will deliver climate and health benefits worth an estimated $34 billion to $54 billion per year in 2030.

But NERA’s numbers say the costs will be much higher by the time the CPP is fully effective—between 2022 and 2033.

When electricity usage is at its highest, the NERA study claims that all 47 states subject to the regulation could see higher electricity prices.

During such peak usage, NERA projects that 41 states could have double-digit increases in electricity prices, with 28 states seeing 20 percent increases: Critics dismissed the estimates NERA provided earlier this year, in part because the provisions of the CPP weren’t final.

But the ACCCE said these new numbers for NERA are based on the plan’s final figures, now that the CPP has been placed in the Federal Register.

“They can grouse all they want, but these numbers come from EPA’s own data,” Sheehan said.

One is that NERA thinks the costs of energy efficiency will be higher than the EPA’s estimates of 11 cents a kilowatt-hour and subsequently decreasing over time.

“We disagree,” Bailey said. “You do the easy things first and the harder things later.”

“We think we did a better job of modeling,” Bailey said, saying the NERA numbers are based on five compliance scenarios and the EPA’s on two.

The EPA stands by its estimates.

“The Clean Power Plan provides ample time and flexibility to states and utilities and builds on trends toward cleaner electricity generation that are already well underway,” the agency said in its email to Watchdog.org.

Considered the most sweeping regulation in the EPA’s history, the Clean Power Plan marks the first time the agency will regulate carbon dioxide emissions from the nation’s existing power plants.

“Critics claim your energy bills will skyrocket,” EPA Administrator Gina McCarthy said in 2014. “They’re wrong. Any small, short-term change in electricity prices would be within normal fluctuations the power sector already deals with. And any small price increase—think about the price of a gallon of milk a month—is dwarfed by huge benefits.”

McCarthy has long maintained that for every $1 spent on the cleaner standards, the public will see $7 in health benefits.

But the CPP has led 27 states to file a federal lawsuit, claiming that the plan exceeds the EPA’s authority and will cost utility payers too much.

Some 18 states have filed their own court motions in support of the CPP, leaving just five states—including Alaska—that have not weighed in: The legal papers have been filed in the U.S. Court of Appeals for the District of Columbia Circuit. No court date has been set, but opponents of the CPP want the court to issue a stay to keep the plan from going into effect until the appeals court rules on its legality.