In This Mississippi Town, Residents Are Fighting Atheist Organization Calling for Removal of Christmas Display 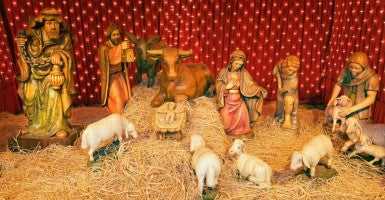 A Christmas display, Like this one in Germany, is under fire in a Mississippi town. (Photo: Meinrad Riedo imageBROKER/Newscom)

In one Mississippi town, residents are fighting back after an an atheist organization requested that that a Christmas display in their city be removed, organizing a show of support for the display.

“I just feel like Christians lose a lot nowadays because we’re too polite,” says Andrea Kirkley, a resident of Collins and a stay-at-home mom. “I’m tired of seeing Christians get pushed down. We’re not pushing our faith on anybody.”

Kirkley, one of the event organizers, told The Daily Signal in an interview that individuals, businesses, and the chamber of commerce “created something for the community to enjoy.”

“I was very proud of my hometown for standing up for what we believe in, and in a positive way,” she says.

Collins, Miss., has the annual “Christmas in the Park” event at its Bettie D. Robertson Memorial Park.

The Wisconsin-based Freedom From Religion Foundation, a member organization of Atheist Alliance International, sent a letter of complaint to the city of Collins, saying they were “contacted by a concerned local resident,” and requested that the display be removed.

The Freedom From Religion Foundation argued that the faith-based display is “unconstitutional” on public property.

“All of the above religious displays are unconstitutional,” Elizabeth Cavell, a staff attorney for the Freedom From Religion Foundation, wrote in a letter to the city dated Oct. 19. “The Establishment Clause prohibits government sponsorship of religious messages.”

“In its current state, Bettie C. Robertson Memorial Park is tremendously unwelcoming to non-Christian citizens,” Cavell continued. “Citizens of all faiths and no faith have an equal right to use city parks without being surrounded by symbols promoting any one religion. A city cannot have a ‘Christian’ park.”

Cavell requested that the city remove the Christian displays in order to “eliminate the appearance of government endorsement of religion.”

Kirkley said that if someone of another faith wanted symbols of his own faith displayed in the park, he is free to do so.

“By all means,” Kirkley said. “Go for it. I would never want someone to hate my savior because he’s on display in the park.”

She said that the display is meant to be “a happy time.”

The displays used in the annual event—which include crosses, angels, and a statue of Jesus—have been in the park for 12 years, Collins Mayor V.O. Smith told WDAM. Some are displayed year-round. The displays are lit in the evenings from Thanksgiving until the day after Christmas.

“They had an unnamed local person complain about the religious displays in our city park,” Smith said. “But there’s more than just Christian material over there.”

The city of Collins does not own or maintain the displays.

In an interview with The Daily Signal, Marie Shoemake, the executive director of the Covington County Chamber of Commerce, confirmed that the organization, not Collins, owns the displays.

Shoemake said that in addition to Christmas and family-friendly displays, there are displays honoring the military and fallen service members.

“There really is something for everyone,” Shoemake said. “I just pray whoever is against it will go through the park.”

Shoemake said that the displays are intended to “bring joy to the community” and have a positive economic impact on the town, with visitors to the park often stopping “in our beautiful town” for gas, food, and shopping.

She said that the displays are maintained by volunteers and church groups, and there is no charge to see them.