12 Bills That the Filibuster Stopped From Becoming Law 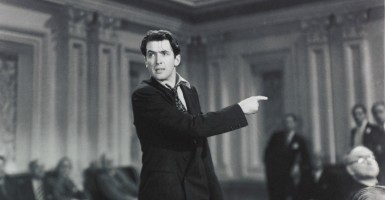 In an iconic scene from the classic film "Mr. Smith Goes to Washington," Jimmy Stewart as a freshman senator employs the filibuster to block and influence a vote. (Photo: Columbia Pictures/ Album/Newscom)

Frustrated by an entrenched Democratic minority in the Senate, some of the Republicans who control both houses of Congress have renewed calls for filibuster reform.

House Republicans penned a letter to Senate leadership in September, asking that it lower the threshold of votes needed to achieve “cloture” and overcome a filibuster blocking action in certain circumstances. A total of 56 of 246 Republican members signed.

And in the upper chamber itself, where Republicans hold 54 seats to Democrats’ 45 (and one Independent), more senators have begun to talk openly about rule changes.

“I think it’s appropriate to be able to debate a bill without having to have a 60-vote margin,” Sen. Mike Rounds, R-S.D., told Politico. “I think when they originally put the rules in place, it was a mistake not to have made that change in the first place.”

>>> Commentary: What the Filibuster Is and Why It’s So Important

Although the House tightly regulates speaking time, by comparison deliberation is almost unlimited in the Senate. One senator can combat legislation by deploying a filibuster to slow the process down and run out the clock.

A filibuster may be overcome only when the Senate votes to reach cloture, when 60 of the 100 senators vote to end debate. If some Republicans get their way and reform the centuries-old filibuster, the political landscape could look very different.

Here are a dozen bills that could’ve become law in recent years if it weren’t for the filibuster:

1. American Jobs Act. In the minority, Republicans still shut down President Obama’s 2011 jobs plan. It would have imposed a 5.6-percent tax on all income over $1 million to pay for new “stimulus” spending by the government. The Democrats’ majority couldn’t pass the measure, which failed 50-49.

2. Buffett Rule. Championed by Senate Democrats and the White House in 2012, the “Buffett Rule” sought to levy a minimum 30 percent tax on wealthier Americans. Forty-five Republicans voted not to end debate, keeping the legislation from the floor and from becoming law.

3. Cap and Trade. Democrats controlled both houses of Congress in 2010, but their “cap-and-trade” legislation stalled in the Senate. Republicans filibustered sweeping restrictions on the use of fossil fuels aimed at cutting carbon emissions and the measure failed to reach Obama’s desk

4. DREAM Act. Cheered by President Obama and passed by the House, the DREAM Act was on its way to becoming law in 2010. The legislation would have blazed a path to citizenship for millions of children brought here by illegal immigrants. But a filibuster-wielding Republican minority delayed a final vote, killing the bill.

5. Card Check. The 2009 “card check” bill would have made it easier for labor unions to organize and stay in power by making union elections by secret ballot obsolete. Instead, employers would be forced to recognize a union once organizers collected a majority of employee signatures. After the Republican minority threatened to filibuster, Democrats scrapped the proposal.

6. Emergency Senior Citizens Relief Act. Elder Americans would have collected an extra $250 in tax credits under the cost of living adjustment in Social Security, or COLA. A Republican filibuster took the fizz out of the proposal and the bill failed, 53 to 45.

7. Gun Control. The gun control legislation sponsored by Sens. Joe Manchin, D-W.Va., and Pat Toomey, R-Pa., backfired in the Senate after Republicans filibustered the measure. The bipartisan bill would have significantly expanded background checks in gun sales but fell shy of the 60-vote threshold to end debate, receiving only 54 votes.

8. Immigration Reform. Toward the end of his term, President George W. Bush pushed for a complete overhaul of the nation’s immigration system in 2007. The measure would have bolstered border security but granted citizenship to millions of illegal immigrants. Republican senators jumped ship and a motion to end debate failed, 53 to 46.

9. Minimum Wage. Republicans launched a filibuster in 2014 to derail a Democrat proposal that would have mandated an across-the-board federal minimum wage of $10.10.

10. The “Public Option.” Sen. Joe Lieberman, I-Conn., joined Republicans threatening to filibuster Majority Leader Harry Reid’s health care bill in 2009. The proposed legislation included a “public option” akin to Medicare but was defeated before it could come to a vote.

11. Prolonging Bush Tax Cuts. In 2010, Senate Democrats tried twice to extend George W. Bush’s tax cuts only to middle-class Americans. Higher tax brackets would have returned to Clinton-era rates under their plan. Republican filibusters slammed the door on anything short of across-the-board cuts.