The War on Speech Continues: Mizzou Tells Students to Report ‘Hateful’ and ‘Hurtful’ Speech to Authorities 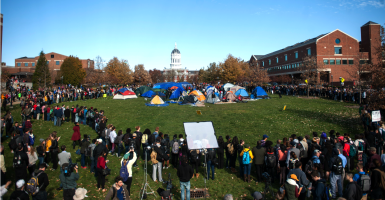 Protests on Monday Nov. 9 at the University of Missouri, in Columbia, Mo. (Photo: Michael)Cali/TNS/Newscom

The University of Missouri at Columbia (Mizzou), the state’s flagship public university, has a problem on its hands: Some students and professors are seeking to shut down reporting at the campus, in the wake of unrest that has been growing for weeks, and which led to yesterday’s resignation of university President Tim Wolfe.

As the New York Times and others are reporting, a video shows students physically pushing away reporters, and shows them being egged on by journalism assistant professor Melissa Click. The video shows Click targeting a journalist who is recording the tent city set up on the Mizzou campus.

The Beginning of a Mobocracy

“Who wants to help me get this reporter out of here? I need some muscle over here,” Click is recorded saying, before the video cuts off. In context, it appears that Click is encouraging the unruly students to physically remove the videographer.

And she’s not alone in this anti-press mentality: Students in the video repeatedly state that reporters have no right to film on the public university campus (First Amendment spoiler: they do have that right).

Signs have appeared on campus stating that the protest area, ironically, is a “No Media Safe Space.”

This is a big problem. For a university with one of the supposedly top journalism programs in the country to have a professor apparently encourage assaults on the media is appalling. And what’s worse: The students appear receptive.

So what is the campus administration doing about it? It is fanning the flames by sending out a campus-wide email encouraging “individuals who witness incidents of hateful and/or hurtful speech” to report on those incidents.

This Stasi-like system of snitching is, apparently, the administration’s attempt to calm the atmosphere at the school by demonstrating a commitment to open-ended hunts for “racism.”

This response will not solve the underlying cultural problem at Mizzou and across the country. Rather than targeting the bad actors appearing in the video, Mizzou is setting up a straw man to attack.

In the wake of the resignation of University of Missouri President Tim Wolfe, disruptive protesters at the school are emboldened. By presenting a weak face, the Missouri administration is inviting more disruption and more demands.

It is certainly the case that universities have a moral and legal obligation to provide for their students’ education, and certain forms of intimidation could rise to the level of interfering with that education.

But right now, that intimidation is not directed at protesters: it is coming from the protesters.

Ordinary Mizzou students, particularly journalism students, are getting the message right now that witch hunts and a politically correct song-and-dance are more important than returning the campus to normal, by any means necessary.