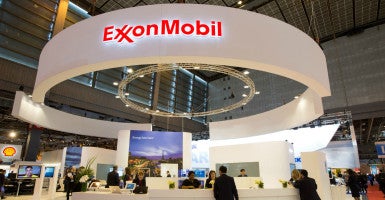 The attorney general of New York is investigating one of our largest oil and natural gas companies because it might disagree with a scientific theory. (Photo: Romuald Meigneux/SIPA/Newscom)

Everyone reading this should do the attorney general of New York, Eric T. Schneiderman, a big favor: buy a copy of the U.S. Constitution, highlight the First Amendment in the Bill of Rights with a bright yellow or orange Sharpie, and mail him a copy.

Schneiderman obviously needs a remedial lesson in the fact that the government is banned from censoring or restricting speech, and certainly has no business “investigating” Americans, including corporations, for their views on – of all things – a contentious scientific theory.

The New York Times is reporting that Schneiderman has subpoenaed extensive financial records, emails and other documents of Exxon Mobil to investigate whether the company “lied to the public about the risks of climate change or to investors about how such risk might hurt the oil business.”  In addition to ignoring the First Amendment, Schneiderman is apparently unaware that the claim that the world is endangered by a warming climate is a scientific theory, not a proven fact. There is dissention in the scientific community about this theory, and robust debate about both the temperature evidence and computer models on which the theory is based.

In fact, as the Heritage Foundation’s Nicolas Loris points out, “flaws discovered in the scientific assessment of climate change have shown that the scientific consensus is not as settled as the public had been led to believe.” Leaked emails and documents from various universities and researchers have “revealed conspiracy, exaggerated warming data, possibly illegal destruction and manipulation of data, and attempts to freeze out dissenting scientists from publishing their work in reputable journals.” Furthermore, the “gaffes” that have been exposed in the United Nations’ Intergovernmental Panel on Climate Change reports “have only increased skepticism” about the credibility of this scientific theory.

Yet the attorney general of New York is investigating one of our largest oil and natural gas companies because it might disagree with a scientific theory.  What is worse, the New York Times article reports that the attorney general has been engaged in a similar, secret investigation of Peabody Energy, the nation’s largest coal producer, for the past two years.  Unfortunately, Peabody has apparently been cooperating in the investigation that violates the company’s fundamental First Amendment rights.

One wonders whether General Schneiderman realizes that he seems to be following the Soviet technique of having the government interfere in science and prosecute anyone who doesn’t agree with the theory most in vogue with politicians and the state.  Joseph Stalin was infamous for his direct involvement in academic disputes in areas ranging from linguistics to physics.  According to “Stalin and the Soviet Science Wars,” a 2006 book published by the Princeton University Press, he only “called off an effort to purge Soviet physics of ‘bourgeois’ quantum mechanics and relativity” as the Soviets were developing their first atomic bomb.   Aleksandr Solzhenistsyn’s book, “In the First Circle,” was all about the Soviet government’s suppression of scientists and engineers with the wrong scientific views.

Besides the dangers of criminal or civil charges being lodged against these companies, the other obvious result of such investigations, which may be their intent, is to chill the speech and advocacy of any “bourgeois” who disagrees with the so-called “consensus” that the climate change theory is real and that it is human activity that is the main cause of the world warming up by a miniscule amount.  Exxon Mobile already may have been deterred since its spokesman said that it stopped funding any groups doing research on climate change in the middle of the past decade “who were making the uncertainty of the science their focal point.”

But then, the science is still uncertain and unproven.  But saying that may be a crime according to Schneiderman.  Since the federal government won’t fund anyone who disagrees with the climate theory, drying up any private research funding that might raise questions is obviously the next step for those who want to stop all scientific dissent.

Criminal and civil investigations of individuals and other entities over disputed scientific theories are not just legally unjustified, they are immoral and plain un-American.  This is politicized law enforcement of the worst kind.    The fact that this is going on in the United States is not just embarrassing, it is shocking.

The New York Times article cites Wall Street analysts who say “this is not good news for Exxon Mobil or Exxon Mobil shareholders” and that they are “uncertain” whether the case will inflict long-term damage on the company.  What is certain is that such politicized law enforcement and government suppression of dissent is not good news for Americans in general and the liberty, freedom, and economic opportunity protected by the First Amendment and the Constitution.

This type of grotesque prosecutorial abuse will inflict long-term damage on our industrial capacity and energy production.  And it may severely damage our ability to conduct the type of research and development in science and engineering that has made us a world leader and driven the economic engine of our high quality of life.