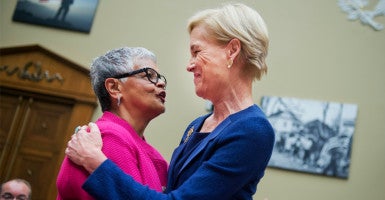 Democratic lawmakers appointed to the Energy and Commerce Committee’s Select Investigative Panel on Planned Parenthood received more than $81,000 in campaign contributions from the organization since 1990, according to a study by the Media Research Center.

“I am proud to name six strong champions of women, families and facts to stand up against the latest Republican assault on women’s health,” Pelosi said in a statement. “Hard-working families deserve better than a taxpayer-funded Republican Select Committee fixated on dismantling women’s health. As Republicans try to take affordable family planning and lifesaving preventive care away from millions of American women, Democrats will be in the room to fight for the truth.”

“While journalists reported the news, they left out one key detail: Those same six Democrats have received more than $81,000 from Planned Parenthood,” the Media Research Center’s Katie Yoder wrote.

Using data from the Center for Responsive Politics, Yoder calculated that since 1998, the six Democrat appointees to the panel have received almost $80,000 in campaign contributions from Planned Parenthood.

According to the data:

The House authorized the panel in order to investigate allegations that Planned Parenthood, the nation’s largest abortion provider, is selling the body parts of aborted babies to researchers for profit. The allegations were raised by a series of undercover videos released by the Center for Medical Progress.

Profiting from the sale of human body parts—including those of the unborn—is a felony in the United States.

Throughout the controversy, spokespersons for Planned Parenthood have denied making a profit from illegal transactions. The organization recently announced that it will no longer accept “reimbursement” for donations of body parts to researchers.

Nadler said in a statement:

We all know that this Republican Select Committee is a sham, set up to attack women’s health in a blatant attempt to eliminate the constitutionally-protected right of women and families to access an abortion. This misguided waste of taxpayer resources is just the latest chapter of politicians attempting to legislate against women’s personal health choices, against medical facts, and against the U.S. Constitution.

Republicans continue to lie about their reasons for setting up the committee, and, while we know that this Select Committee is totally illegitimate, those of us who know the truth, and know Republicans will use any excuse to stop safe and legal abortion in this country, must stand up against the lies being used to take away the rights guaranteed by our Constitution. I am proud to stand up for those rights, and to serve with my five colleagues as an advocate for truth and defender of the lifesaving women’s health services used by millions across the country.

The Daily Signal previously reported that Schakowsky and Nadler were two of the members of Congress who sent a letter to U.S. Attorney General Loretta Lynch and California Attorney General Kamala Harris requesting that they investigate the Center for Medical Progress.

The Daily Signal also reported that Schakowsky and DeGette were two of the lawmakers who introduced the EACH Woman Act, legislation that would end the Hyde Amendment and permit taxpayer funding of elective abortion.