Top Officials With Failed Obamacare Co-Ops Made an Average of $245,000 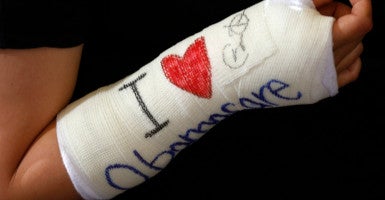 Before 11 of the 23 nonprofit insurers created under Obamacare announced they would be closing their doors, the top executives running their operations raked in large sums of money.

According to 2013 tax filings accessed through Guidestar.org, the top executives at the 11 co-ops that have announced they will be winding down operations made an average of $245,203 annually. Tax filings for 2014 are not yet publicly available.

The Affordable Care Act placed a $500,000 salary cap on co-op employees, and executives running the nonprofit insurers earned a high of $490,125—paid to Jerry Burgess, chief executive of Consumers’ Choice Health Insurance Cooperative in South Carolina—and a low of $46,524—paid to Joanne Hill of Colorado HealthOP in Colorado.

Aaron Albright, spokesman for the Centers for Medicare and Medicaid Services, told The Daily Signal the co-op loans cannot be used to provide “excessive compensation.” Additionally, Albright said the Obama administration reviews top co-op officials’ employment agreements to ensure the nonprofit insurers are complying with the terms of their loans.

Hill founded Colorado’s nonprofit insurer but left last month after Colorado HealthOP elected new members to its board. Of the executives identified in relevant tax filings, four moved on to other jobs. One of those four, Tom Zumtobel, who previously served as Nevada Health Cooperative’s chief executive officer, left and became the head of Arizona’s co-op.

Congress created the co-ops to inject competition into areas where few insurance providers offered plans. The federal government awarded $2.4 billion in startup and solvency loans to 23 co-ops that were approved by the Centers for Medicare and Medicaid Services.

Since Obamacare went into effect in 2013, 11 co-ops have announced they’re winding down operations and no longer offering insurance on the state-run and federal exchanges in 2016. Those 11 co-ops are located in Arizona, Colorado, Iowa, Kentucky, Louisiana, Nevada, New York, Oregon, South Carolina, Tennessee, and Utah.

The failed co-ops received more than $1.1 billion in total and enrolled more than 690,000 Americans in plans, according to the Centers for Medicare and Medicaid Services and state regulatory filings.

The Centers for Medicare and Medicaid Services also did not return a request for comment.

Joshua Gill contributed to this article.