Meet the New Lieutenant Governor of Kentucky. Here Are 15 Facts About Jenean Hampton 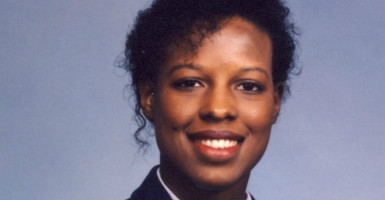 Jenean Hampton not only will be Kentucky's lieutenant governor, she'll be the first black to hold statewide office. (Photo: Matt Bevin's campaign site.)

Elections were held around the country Tuesday, and results in Kentucky made history.

Matt Bevin, the Republican candidate for Kentucky governor, and running mate Jenean Hampton won by a margin of 53 percent to 44 percent over Kentucky Attorney General Jack Conway, a Democrat, according to CNN.

Conway had been at the top in polls leading up to the election. Bevin, who tried to unseat Sen. Mitch McConnell (R-Ky.) in the primaries last year, has said he wants to roll back the expansion of Obamacare benefits in Kentucky.

1. Hampton becomes the first black to win statewide office in Kentucky. “I just see myself as a person, I don’t see myself as ‘Jenean, black person,’” Hampton told Louisville’s Courier-Journal during the campaign. “I’m just Jenean who happens to be black.”

3. Her victory with Bevin was only the second time in 44 years that Republicans have won the Kentucky governor’s race.

4. She grew up in inner-city Detroit, to parents who divorced when she was 7 years old. Her mother was left to raise her and three sisters.

5. She vowed when young that she would not “live a life of poverty,”  she told the Courier-Journal. “A huge part of what formed my opinions was the peer pressure that I got to fail.”

6. After a liberal upbringing, Hampton connected with President Ronald Reagan’s ideals and made a switch to conservative thinking.

7. Hampton’s mother has switched to the GOP, but Hampton’s father (who died in 2014) never accepted his daughter’s conservative views.

My husband, mom and myself just voted. Three more votes for the entire republican team! @MattBevin#KyGov

8. She has been married for 14 years to Dr. Doyle Isaak, a retired Air Force flight surgeon.

9. Hampton is a member of the Eleventh Street Missionary Baptist Church in Bowling Green, according to her campaign website.

10. To pay for college, she worked for five years in the auto industry, including General Motors. She holds an industrial engineering degree from Wayne State University and a master of business administration from the University of Rochester.

11. At the beginning of her seven years of military service, she was a computer systems officer for the Air Force. Her job duties included writing code and testing software.

12. Hampton was deployed to Operation Desert Storm in Saudi Arabia, where she was an Air Force captain.

13. She worked her way up to plant manager during a 19-year career in the corrugated packing industry before she entered politics.

14. She got active in the tea party movement. “In some instances the Republican Party as a whole has strayed from its roots, its own platform,” Hampton told the Courier-Journal.

15. She lost a 2014 race for state representative but gained an endorsement from Sen. Rand Paul, R-Ky. “Sometimes you’re screaming at the TV, you see things that need to be improved, and you’re screaming that someone needs do something,” she told WKU Public Radio in 2014. “Well, sometimes that someone is you.”

THANK YOU KENTUCKY for the opportunity to serve you!