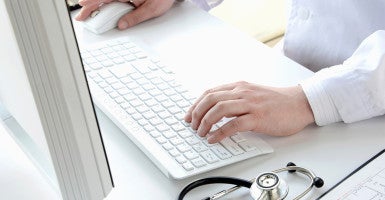 The nation’s only Catholic ministry to share health care costs expects to get a membership boost out of the latest Obamacare open enrollment period, which runs through January.

CMF CURO, a subsidiary of the nonprofit Christ Medicus Foundation, currently has roughly 1,250 members in 46 states and Washington, D.C.

“It’s so important to have this health care sharing alternative to [Obamacare],” Mike O’Day, executive director of the foundation, said at a press conference Monday in Washington.

A health care sharing ministry is an organized, member-based group that shares medical costs. Groups of this nature that existed before 1999, which includes the Christ Medicus Foundation, are exempt from mandates of the Affordable Care Act, popularly known as Obamacare.

An estimated 300,000 Americans belong to such ministries, including the 1,250 in this Catholic one, Louis Brown, CMF CURO’s director, said. It works in partnership with Samaritan Ministries International.

According to the Centers for Medicare and Medicaid, 53 health care sharing ministries exist in the United States. Other faith-based nonprofits include Christian Healthcare Ministries, Liberty HealthShare, Medi-Share, and Samaritan.

“For individuals that have to go and get their insurance in the marketplace, there are no alternatives that are consistent with Catholic and biblical teachings other than these health care sharing ministries,” Brown said at the press conference.

CMF CURO, which formally launched in January and is headquartered in Troy, Mich., was designed to provide that option for individuals or families who believe that Obamacare-mandated services such as contraception or abortion violate their religious beliefs.

“Millions of Catholics are making decisions about health care,” Brown said. “We think it’s a really important story on multiple levels, especially as premiums are increasing and tax penalties [for opting out of Obamacare] are becoming a reality.”

Under the CMF CURO model, which Brown is careful to explain is not health insurance, members share medical needs, pulling together when a member of the nonprofit must have emergency care.

“The concept is basically taking the ‘I’m my brother’s keeper’ sort of seriously and saying, ‘Look, rather than using insurance, we’re going to take care of each other as part of this ministry,’” said Ed Haislmaier, senior research fellow in health policy in The Heritage Foundation’s Institute for Family, Community, and Opportunity. “So it’s not insurance, and they’re not taking on risk. [Members] don’t have an obligation, but there is an expectation, which is voluntary and charitable.”

Most individuals in these ministries cover their own medical needs for minor conditions, Haislmaier said. It is only when members are diagnosed with a serious condition or face a medical bill they can’t pay that they rely on peer-to-peer, person-to-person contributions.

As such, Brown said, the plan may not be the best option for individuals with pre-existing conditions. But, he said, members are pleased with their coverage.

“There are a lot of new things that are exciting that are going on in the United States, and particularly in the Catholic Church, that initially sound impossible,” Brown said, adding:

I think the proof is in the pudding. People are joining, and they’re staying because it works. It requires faith … so much of American society is secularized that the notion of depending upon other people, other Christians, sounds nuts. But it works.