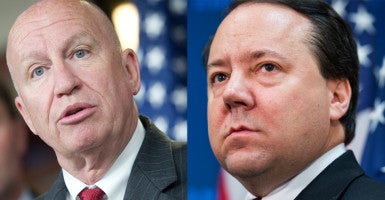 Reps Kevin Brady and Pat Tiberi square off to become the next Chairman of the Ways and Means committee. (Chris Maddaloni/CQ Roll Call/Newscom

The two representatives jockeying for Speaker Paul Ryan’s old job as chairman of the powerful tax-writing House Ways and Means Committee are similar in many ways, but they have at least one distinguishing characteristic.

The contenders, Reps. Kevin Brady, R-Texas, and Pat Tiberi, R-Ohio, voted differently on a controversial discharge petition paving the way for the reauthorization of the Export-Import Bank.

Tiberi supported a discharge petition that circumvented the Financial Services Committee to force a floor vote on reauthorizing the shuttered bank. Brady voted against it.

The two launched their bids to take up the Ways and Means Committee gavel last week.

Both are current members of the Ways and Means Committee. Both previously chaired other committees, and now both say they share Ryan’s vision of reforming how the House does business.

But the discharge petition, which Tiberi voted for, depended on an overwhelming majority of Democratic votes to pass.

Breann Gonzalez, a spokeswoman for Tiberi, defended his decision, telling The Daily Signal that “under current House rules this was the only option.”

“Regarding the Ex-Im discharge petition, this is not something Mr. Tiberi has ever done before and not something he wanted to have to do,” Gonzalez said in a statement. “However, he stood with the majority of the majority who wanted a vote.”

Republican supporters of Ex-Im worked with House Minority Leader Steny Hoyer to secure the 218 signatures needed for the discharge petition. The House voted on the measure last week, 246-177. Just 62 Republicans, including Tiberi, voted for it, while 177 Republicans opposed it.

Once discharged out of committee, the bill reauthorizing the expired agency passed through the House by a vote of 313-118.

While Brady supports the Export-Import Bank, he opposed using a discharge petition to push Ex-Im through the legislative process.

“Look, I understand some members genuinely felt this was their only option,” Brady said in a statement. “But I don’t sign or support discharge petitions when we are in the Republican majority.”

Over the next few weeks, the Republican Steering Committee will choose the next Ways and Means chairman.

Brady, who took office in 1997, was passed over for the top job in favor of Ryan earlier this year. He has seniority over Tiberi, who came to Congress in 2001.

Brady has a 67-percent lifetime rating on Heritage Action’s scorecard, while Tiberi scores 50 percent over the course of his career. Club for Growth rates Brady at 83 percent and Tiberi at 64 percent during their time in Congress.

Both candidates have hurdles to overcome.

A former Boehner ally, Tiberi faces possible opposition because of his leadership ties. His support of the discharge petition could further complicate his bid, according to Dan Holler of Heritage Action for America.

“It would be stunning to see a chairmanship awarded to a lawmaker that worked with the Democrat leadership team to bypass a widely respected Republican committee chairman,” Holler said.

Brady must overcome his own obstacles. If elected, he would become the seventh committee chairman from the Lone Star state, a development that some fear could result in unfair over-representation.

The election will proceed under the old rules of the Republican Steering Committee. During the scramble to elect the next House speaker, Paul Ryan, R-Wis., promised to reform the way the committee does business. But those changes aren’t likely to occur before Thanksgiving.