China Has More Billionaires than US 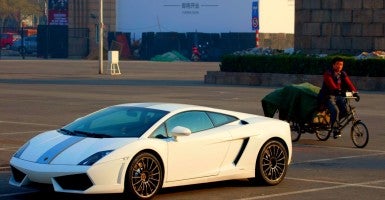 Thomas Whittaker is a member of the Young Leaders Program at the Heritage Foundation.

The number of Chinese billionaires has increased by almost 70 percent in the past year, according to figures in the 2015 “Hurun Rich List,” an annual report released by the Hurun Research Institute.

China has now surpassed the United States in number of billionaires.

This new development once again shows that China has come a long way from the economic troubles of the era before communist leader Deng Xiaoping. Furthermore, the rise of China’s billionaires highlights the ever-increasing capability of the modern Chinese industry tycoon to compete for the world market against Western counterparts.

According to the 2015 Forbes 400 list, there are 545 American billionaires. Each of the first eight individuals on Forbes’ list makes more than China’s richest person, real estate mogul Wang Jianlin, chairman of the Dalian Wanda Corporation.

Despite its achievements, China’s continued financial success will be heavily reliant on its ability to allow economic growth in China’s massive rural areas. While there has been continual growth, China’s per capita gross domestic product still remains quite low. The Heritage Foundation’s 2015 Index for Economic Freedom reported China’s per capita GDP to be $9,844, a stark contrast to the U.S. per capita GDP of $53,101. The Hurun Rich List reports that almost half of China’s billionaires live in Beijing, with Shenzhen and Shanghai trailing respectively. Economic development in the major metropolitan areas has been the focus of China’s financial growth, and, as such, much of rural China still lives under conditions of extreme poverty.

The continued rise of Chinese industry tycoons will likely produce more competitive markets for the U.S., especially within the information technology industry. For American companies, this may create strains in previously dominated industries, the effects of which might be felt by the U.S. economy.

Nevertheless, China’s strict business policies and lack of development in rural areas inhibit its potential for continued overall growth. As such, without economic freedom reforms, China will not soon surpass the financial power of the United States.