31 of the Best Quotes From Fred Thompson 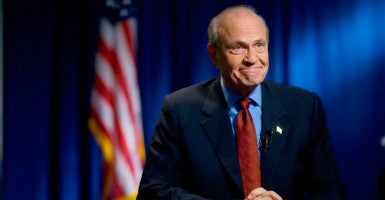 Former United States Sen. Fred Thompson passed away on Sunday, according to a report from The Tennessean.

Thompson, 73, who served in the Senate from 1994-2003 as a Republican from Tennessee, is also known for his role as an attorney in the Watergate investigation (which led to the resignation of President Richard Nixon), his time spent as an actor on Law & Order, and his run for president in the 2008 elections.

Thompson’s death occurred after a recurrence of lymphoma. According to reports, he was diagnosed with cancer in 2004 and was said to have gone in remission in 2007. He died while in Nashville.

1 . “The people I knew and the experiences I had in that little town formed the prism through which I have viewed the world, and they shaped the way I have dealt with events throughout my life,” he wrote of his hometown Lawrenceburg, Tennessee, in his 2010 memoir, “Teach the Pig to Dance.”

2. “A man who lives a full life and at the end of the day thinks exactly the way he thought about things much earlier on is pretty much a hapless guy, in my estimation,” Thompson told National Review in 2007.

3. “This country has shed more blood for the freedom of other people than all the other nations in the history of the world combined, and I’m tired of people feeling like they’ve got to apologize for America,” Thompson said at the Iowa State Fair in 2007.

4. “I thought that standing on the Senate floor, engaging in a great debate and making a difference was the pinnacle of political activity,” he told People in 1985. “The more I’ve seen it, the less interested I am.”

5. “After two years in Washington, I often long for the realism and sincerity of Hollywood,” he said in a speech before the Commonwealth Club of California.

DNC Chair Schultz: “the left is the center of America right now”. The lesson here: never go to Debbie to get your tires balanced. #tcot

7. “This was never meant to be the place where I would stay for my entire career,” Thompson said of his time in the Senate.

“You are either going to do the right thing or you’re not. If you are politically tacking all the time, it makes life too long and too complicated.”

8. Asked in 2007 to name his top accomplishments, Thompson told National Review, “You mean besides leaving the Senate?”

Thanks for all the birthday wishes yesterday. I’ll be deleting them off my server as soon as I check them for classified information. #tcot

10. “It occurred to me that, to paraphrase one of Churchill’s comments, perhaps I had more to be humble about than I had realized,” he wrote of his failed 2008 presidential bid. “It also occurred to me that this was a pretty doggone expensive way to achieve a little humility.”

13. “Watergate was not a monumental shock to my system,” Thompson, who helped investigate the Nixon scandal, told People in 1985. “Once you have practiced law and been involved in politics, you are not disabled by the discovery that people—even good people—do bad things.”

14. “Some of our folks went to Washington to drain the swamp and made partnership with the alligators instead.”

Branson wants world “powered by sun, powered by wind”. Ohhhh…like in the Dark Ages when everyone used sailing ships and clotheslines #tcot

16. “Scientists say they’re now several steps closer to being able to resurrect extinct species. Might want to start with the Founding Fathers before it’s too late.”

17. “What’s happened in the past is interesting and relevant, but not in any way determinative of the future,” Thompson told National Review.

U of CA considering ban on “expressions of intolerance”. Sounds idyllic. Everyone throw another book on the bonfire & sing Kumbaya. #tcot

19. “Global warming experts are saying that sea levels could rise 20 feet. Apparently their strategy for surviving this is to stand on top of a pile of government research grant money.”

Obama: I’ll “push our economy to transition off fossil fuels”. Still waiting for him to start flying in solar-powered Air Force One. #tcot

21. “My public position has always been the same. I’ve been 100 percent pro-life in every vote that I’ve ever cast,” Thompson said in an interview during Meet the Press: 2007 “Meet the Candidates” series.

On ABC, Josh Earnest said that the economy is “building momentum”. Well, Josh, things that are rapidly going downhill often do that.

24. “Hopefully, we can build bridges, but we also have to draw lines,” he said of U.S. relations with China in a 2001 interview with PBS. “And when we draw lines in the sand with regard to certain basic things that are vital to our interest and to the interest of democracy and our friends around the world, we have to be willing to back that up.”

27. “The problem is that agencies sometimes lose sight of common sense as they create regulations.”

USDA wants to give students 3 meals/day year-round. Perfect. Won’t get an education, but at least they get bread lines & soup kitchens #tcot

30. “If Saddam Hussein was still around today with his sons looking at Iran developing a nuclear capability, he undoubtedly would have reconstituted his nuclear capability. Things would be worse than what they are today.”

31. “Where I stand doesn’t depend on where I’m standing,” he said, comparing himself to Mitt Romney in 2008.