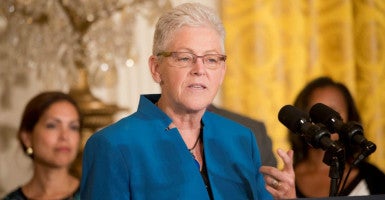 It is difficult to see how a U.S. envoy to Paris for the climate deal will convince the United Nations that Americans support President Obama’s promise to cut carbon dioxide emissions.

The cornerstone of Obama’s promise to the U.N. is called the “Clean Power Plan.” Developed by the U.S. Environmental Protection Agency, the plan is a set of regulations on new and existing power plants that, realistically, would eliminate the use of coal-powered electricity and force states to meet targets for reducing carbon dioxide emissions set by the agency.

A bipartisan group of lawmakers in both the Senate and House of Representatives took leadership on the issue and put forth resolutions of disapproval of the Clean Power Plan.

The House Energy and Commerce Committee is set to vote this week on that chamber’s measures. Rep. Ed Whitfield, R-Ky., chairman of the energy and power subcommittee, said:

These resolutions serve to halt EPA’s unauthorized actions and ultimately are about protecting ratepayers across the country from increased electricity prices, reliability threats, and jobs.

Obama surely will veto any revocation of the Clean Power Plan that makes it to his desk. However, the votes in Congress hardly represent a wasted effort.

The votes will send a clear message to Americans—as well as the nations meeting next month for the the U.N. climate summit known as the Paris Protocol—that the Obama administration’s unilateral attempt to fundamentally change our economy and energy sector isn’t acceptable.

Here are two simple but compelling reasons to reject the Clean Power Plan, even if some in Congress believe that a need exists to address climate change:

1. The Clean Power Plan does next to nothing to reduce global temperatures. Obama hasn’t given Americans, or the world, an answer to perhaps the most important question: What kind of impact will the agency’s plan to counter global warming have? Models created by the EPA itself show that the climate impact of the Clean Power Plan is less than 0.02 degrees Celsius in warming avoided over the next 85 years.

It’s enlightening when the EPA and another of the loudest advocates for action on climate change say as much.

EPA Administrator Gina McCarthy testified before Congress that the Clean Power Plan isn’t about reducing global temperatures, but about “an investment opportunity” and “the tone and tenor” of the Paris climate negotiations.

Jim Hansen, a professor at Columbia University who used to head NASA’s climate arm at the Goddard Institute for Space Studies, called the Clean Power Plan “practically worthless,” even though it is the centerpiece of the Obama administration’s climate agenda. Hansen is far from what Obama calls global warming or climate change “deniers.”

2. The Clean Power Plan attempts to address global warming in a destructive way. Those on both sides of the aisle and of opposite convictions about global warming or climate change have opposed the plan for the simple, immensely important reason of how the Obama administration is attempting to reduce carbon dioxide emissions.

Rather than go through the legislative process, the administration has pushed the Clean Power Plan through regulation from the EPA. This fact alone should strike observers as rather odd, given that the Federal Energy Regulatory Commission, the agency tasked with regulating the electric grid, along with the nonprofit North American Electric Reliability Corp., barely were consulted as the EPA drafted the rules.

The Clean Power Plan has many legal problems. Nicolas Loris, the Herbert and Joyce Morgan fellow at The Heritage Foundation, writes that the plan exceeds the EPA’s statutory authority, violates federalism, unconstitutionally coerces states, and doubly regulates existing power plants against the express will of Congress.

Although the EPA repeatedly has claimed that the Clean Power Plan gives states “flexibility,” it is hard to see how there is room for flexibility in federal targets that must be met with a federally approved plan.

An Obama ally and mentor agrees. Laurence Tribe, a Harvard law professor, put it eloquently in saying that representative government, not the pros and cons of addressing climate change, is at issue:

At its core, the issue the Clean Power Plan presents is whether EPA is bound by the rule of law and must operate within the framework established by the United States Constitution. … Accordingly, EPA’s gambit would mean citizens surrendering their right to be represented by an accountable and responsive government that accords with the postulates of federalism.

Regardless of political party or position on climate change or global warming, Congress should be commended for standing up to unelected bureaucrats who are attempting to re-engineer America’s energy economy and drive up prices for households and businesses with little to no climate benefit in return.