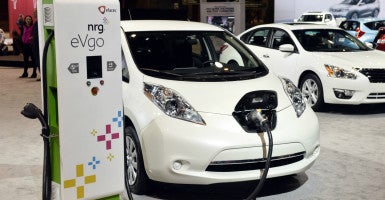 According to Georgia car registrations, sales shot up as electric car buyers rushed to take advantage of the tax credit before it expired. (Photo: Brian Kersey/UPI/Newscom)

For more than 15 years, Georgia offered one of the country’s most generous tax credits for people who bought electric cars.

But the $5,000 subsidy went away three months ago, and a look by Watchdog.org at how the tax credit’s expiration has affected sales shows a dramatic drop in the number of all-electric cars such as Teslas and Nissan Leafs purchased in the Peach State.

“That’s the assumption we’ve been making,” said Don Francis, coordinator of Clean Cities-Georgia Coalition, who was opposed to getting rid of the subsidy.

“I thought the credit turned from an incentive into a virtual entitlement,” said state Rep. Chuck Martin, R-Alpharetta, who spearheaded the drive in the state Legislature to sunset the tax credit.

According to Georgia car registrations, sales shot up as electric car buyers rushed to take advantage of the tax credit before it expired. But the numbers declined sharply in July and took a swan dive in August—the most recent month tabulated:

But Martin said the credit was unfair.

First, the Georgia subsidy applied only to all-electric vehicles, not hybrid cars like a Chevy Volt or a Toyota Prius that use both gasoline and electricity.

“A Kia Optima hybrid—and full disclosure, I own one of those—got no credit from the federal level or the state level,” Martin said.

Second, when the state break of up to $5,000 was added to the credit of up to $7,500 the federal government already gives electric car buyers, drivers in Georgia could lease one of the lower-priced electric cars such as the Nissan Leaf for about $200 a month and end up spending very little money out of their own pocket.

“It was never really free, but it was very inexpensive,” Francis conceded.

“It was essentially taking money that would have been paid into taxes in Georgia and a subset of people were getting their car paid for,” Martin said.

Sure enough, sales of the Nissan Leaf in Georgia have taken the biggest hit since the tax credit expired, going from more than 1,029 in May and 1,008 June to just 66 in August.

“When you’re having a product that’s selling because it’s subsidized, what’s the push for Nissan to be innovative and make that car less expensive or more valuable to the consumer?” Martin asked. “I always said [the tax credit] was too open-ended, too generous, and too targeted.”

“Historically, we have used the tax code to give people [incentives] to do the right thing and [offer them disincentives] from doing the wrong thing,” Francis said in a telephone interview, citing high taxes on things like cigarettes and tax breaks for home mortgages.

Georgia’s electric vehicle tax credit was instituted in 1998 in large part to help reduce the impact of air pollution, especially in the Atlanta metropolitan area, which was not in compliance with clean air standards.

“The people who are losing out now are middle-income folks who were beginning to buy the vehicles,” Francis said. “They first hit on it because of the cost, but after they got the vehicle it spread by word of mouth. … We were just starting to see that transition.”

Benita Dodd, vice president of the Georgia Public Policy Foundation, a free-market think tank based in Atlanta, said it’s not the role of the federal or state government to offer incentives to private industries.

“That’s social engineering,” Dodd said. “A lot of Nissan Leafs are on the road [in Georgia] because of this subsidy, but people are supposed to be driving electric cars because they’re supposed to be more environmentally responsible. So if you’re that concerned about the environment, then why not pay full price for what you’re getting?”

The next legislative session in Georgia starts next January, and Francis said he hopes the tax credit can come back with revisions, such as including hybrids and lowering the credit from $5,000 to about $3,000.

“We’re working on that right now, to see what the coalition of the willing looks like,” Francis said.

“If somebody brings forth some legislation, I’ll listen to both sides and see what makes sense for the state of Georgia and policy in general,” Martin said.

While the $5,000 tax credit was eliminated, the state imposed a $200 yearly registration fee on zero-emission vehicles as part of a larger transportation bill. In order to help maintain roads, the fee was instituted to make up for the money electric car drivers don’t pay in gasoline taxes.

In a weird political twist, Martin ended up voting against the transportation bill that included doing away with the electric car subsidy he worked so hard to repeal because he thought the $200 fee on drivers of zero-emissions vehicles was too high.

“It’s too much of a burden,” Dodd said. “That’s more punitive than fair-market.”

But the GPPF is glad to see the $5,000 electric car subsidy go away.

“You should be able to justify the cost of electric cars, and obviously, with more cars coming on the market, the price will come down,” Dodd said. “So why prop it up artificially on the backs of taxpayers?”