The European Parliament is Wrong on Edward Snowden and National Security 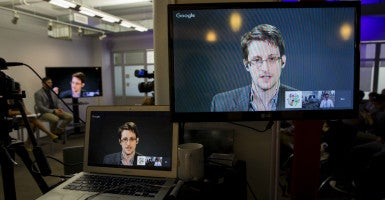 Edward Snowden decided to take the law in his own hands and bypass the official “whistleblower” process. (Photo: Andrew Kelly/Reuters/Newscom)

On Oct. 29, the European Parliament approved a resolution (passed by 285 votes to 281) calling “on European Union Member States to drop any criminal charges against Edward Snowden, grant him protection and consequently prevent extradition or rendition by third parties, in recognition of his status as whistleblower and international human rights defender.”

The European Parliament, based in Brussels, has no legal power to compel European Union countries to implement its demands. But it frequently acts as a bully pulpit in Europe to advance a distinctly left-wing agenda and a broader supranational ideology that seeks to trample on the principles of national sovereignty and self-determination. The resolution also condemns “recent laws in some Member States that extend surveillance capabilities of intelligence bodies,” including in France, the United Kingdom and the Netherlands.

These laws have been introduced by national governments to combat the rising threat posed to Western security by the rise of ISIS and the growing presence of Islamist extremism on European soil.

The idea that sovereign nation states should bow to the whims of the European Parliament is both ludicrous and dangerous. This goes to the very heart of what is wrong with the European Project and the mounting attempts by bodies of the European Union to usurp the powers of European governments.

The European Parliament also is flat wrong in its attempts to portray Edward Snowden as a noble whistleblower who is being victimized by the United States and its allies in Europe. As David Shedd, former director of the U.S. Defense Intelligence Agency and now a Visiting Distinguished Fellow at the Heritage Foundation notes:

“Although Snowden purports that he was compelled to publicly reveal “illegal collection” by NSA in the absence of any alternatives, he in fact bypassed all available legal and policy mechanisms at his disposal as a “whistle blower” witness to report through appropriate channels any alleged misdeeds by National Security Agency. He took it upon himself to remove voluminous amounts of classified information from NSA’s databases – information that has and will continue to potentially do great harm to the national security of the United States and its allies, including our European national security partners. Snowden’s unauthorized removal of millions of classified files from the NSA repository that he had sworn to protect by having a security clearance and with the now likely passage of that sensitive information to our adversaries such as the Russians, Snowden may be the most significant traitor in the history of the United States and deserves to be prosecuted for espionage under the full extent of U.S. law.”

Snowden was a U.S. government contractor who worked on sensitive national security programs. Before being given access to that material, and as a condition of his employment, he was required to sign legally binding documents promising not to disclose classified material. Those documents made it clear that disclosing classified information without authority is a felony, punishable under United States law.

Snowden decided to take the law in his own hands and, as Shedd noted above, bypass the official “whistleblower” process. He disclosed highly classified national security material with little to no regard for the consequences.

The European Parliament vote is all the more strange because Snowden himself has “volunteered to go to prison,” referring to his offers to the U.S. Department of Justice to face up to his crimes. There is nothing in the public record indicating the U.S. government has offered Snowden a plea bargain, but it could happen in the future.

The non-binding Snowden resolution is further proof of the lack of commitment by the European Project to the rule of law and national sovereignty. The United States would be wise to ignore this act of leftist political theatre.