See How Your Senators Voted on the Boehner-Obama Budget Deal 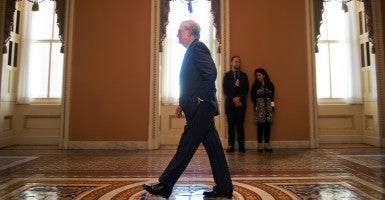 The Senate passed the Bipartisan Budget Act of 2015 64-35, sending the bill to the president's desk. (Photo: Tom Williams/CQ Roll Call/Newscom)

Less than five days after it was introduced, the Senate passed the 144-page, two-year budget deal that suspends the debt limit until March 2017 and raises spending caps.

The Senate passed the budget deal, 64-35, just after 3 a.m. on Friday. Thirty-five Republican senators opposed the deal, though it was not enough to stop the bill from heading to President Obama’s desk. The bill was approved after a 1 a.m. procedural vote which passed, 63-35, and allowed the budget plan to proceed.

The president is expected to sign the two-year budget agreement, called the Bipartisan Budget Act of 2015, within the next few days.

Though the deal passed by the House and Senate with support from members of both parties, the fiscal plan was protested by conservative senators who opposed both the substance of the deal and the manner in which it was negotiated.

Republican Sens. Mike Lee of Utah and Jeff Sessions of Alabama—the current and former chairmen of the Senate Steering Committee, respectively—sent a letter to their GOP colleagues calling on them to oppose the deal. In their message, Lee and Sessions criticized the deal for being “crafted in secret without the involvement of the vast majority of our conference.”

Additionally, Sen. Rand Paul, R-Ky., threatened to filibuster the legislation in what many believed would be an overnight protest. Paul, however, spoke on the Senate floor for just 18 minutes.

The Kentucky senator did appear on the Senate floor later in the night and criticized the deal for giving Obama unlimited borrowing authority.

“Both sides of the aisle have what I would call sacred cows. On the right, they have the sacred cow of military contracts. …The left wants more welfare,” he said, adding, “Should we give Congress more money? Hell no.”

Conservative senators went head-to-head with Republican leadership before the vote.

“The budget deal before the Senate today is not just a horrible piece of legislation that is undeserving of this chamber’s support. It also represents the last gasping breath of a disgraced, bipartisan Beltway establishment on the verge of collapse,” Lee said on the Senate floor. “The bill is a product of an unfair, dysfunctional and fundamentally undemocratic process, a process that is virtually indistinguishable from what we promised the American people a GOP-controlled Congress would bring to an end.”

McConnell, though, stressed that the agreement satisfied the list of demands Republicans had during negotiations with Democrats.

“This agreement isn’t perfect. I share some concerns other colleagues have raised. But here’s the bottom line: this is a fully offset agreement that rejects tax hikes, secures long-term savings through entitlement reforms and provides increased support for our military, all this at a time when we confront threats in multiple theaters,” McConnell said on the Senate floor. “Each of these was a Republican goal heading into negotiations. Each of these items was achieved in the agreement before us.”

The Bipartisan Budget Act of 2015 lifts spending caps by $80 billion—$50 billion in 2016 and $30 billion in 2017—with the increases split evenly between defense and nondefense spending.

It also suspends the debt limit until March 2017, and shifts $150 billion from the Social Security Trust Fund to the Disability Insurance Trust Fund

The budget deal was viewed by Boehner, who resigned from his post earlier this month, as a way to “clean the barn” for his successor, the newly elected Speaker Paul Ryan, R-Wis.