This Is the Worst Budget Deal GOP Has Negotiated Since George H.W. Bush Violated No New Taxes Pledge 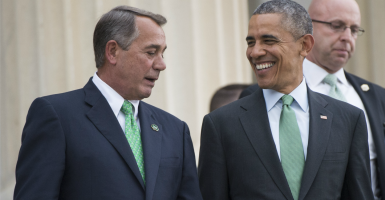 Halloween is looking especially scary this year. On Monday, Republican leaders in Congress declared an unconditional fiscal surrender to President Barack Obama and the  left, negotiating a dangerous budget deal that eliminates all of the checks on Washington’s spend-and-borrow binge by breaking the budget caps, ending the sequester and raising the debt ceiling by over $1 trillion.

It’s the worst budget deal to be negotiated by the GOP since George H.W. Bush violated his no new taxes pledge in 1990 at Andrews Air Force Base.

The result of that capitulation was to make Bush a one-term president and to split the Republican party right down the middle. This deal has the same catastrophic potential.

Here are some of the fiscal facts that make this such a betrayal. A Heritage Foundation analysis finds that federal spending in 2016 was already expected to climb by more than $200 billion. This was to be a 5 percent rise in outlays in a year when inflation is barely above zero.

Under this budget deal, the spending caps rise by an extra $80 billion over two years, the Overseas Contingency Operations (OCO) slush fund receives another $147 billion in “emergency spending,” and the debt limit is suspended through March 15, 2017.

If this goes through, the caps and sequester are dead. All fiscal discipline is tossed out the window. House Speaker John Boehner has negotiated away his greatest legacy: the 2011 Budget Control Act. He said he was going to “clean out the stables” but instead he left a giant mess for incoming speaker Paul Ryan.

Obama says this will mean entitlement reforms, but those are long term and minor.

These are certainly worth doing, but not in exchange for giving up fiscal discipline and $300 billion in additional spending. In return for this  short-term spending blow out, the deal provides several obscure  promises of future cuts in entitlements such as auctioning off portions of the federal broadcast spectrum, and extending the sequester on Medicare and certain other mandatory spending programs by one year.   They’re also planning to sell crude oil from the Strategic Petroleum Reserve at the rate of 5 million barrels a year starting in fiscal year 2018, rising to 10 million barrels from 2023-2025, which makes no sense because the price of oil is so low. They are going to buy high and sell low.

Worst of all is the rise in the debt ceiling with noconditions attached. There are no spending reforms, no program eliminations, no new caps to stop the blizzard of borrowing that has lifted the debt ceiling into the near $20 trillion stratosphere.

House Minority Leader Nancy Pelosi is a happy camper today and so are almost all of her supporters. They won a big victory and Republicans who back it are fiscal frauds. It should be killed and Paul Ryan should start over.