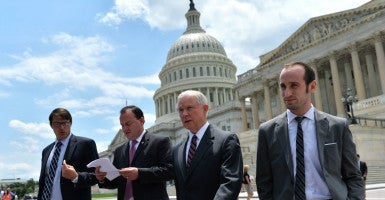 Sens. Mike Lee of Utah and Jeff Sessions of Alabama sent a letter to their GOP colleagues urging them to vote "no" on the budget deal. (Photo: Kevin Dietsch/UPI/Newscom)

The chairman and former chairman of the Senate Steering Committee, a group of the most conservative senators, are urging their colleagues to oppose the budget deal crafted by congressional leaders on both sides of the aisle.

Republican Sens. Mike Lee of Utah and Jeff Sessions of Alabama, the current and former chairs of the committee, respectively, sent a letter to their Senate colleagues today asking them to vote against the deal and oppose the “nontransparent process used to produce it.”

In their letter, the Steering Committee leaders criticized their Republican congressional leaders for crafting the deal behind closed doors, leaving no room for input from Republicans.

“Regrettably, the Bipartisan Budget Act of 2015 serves as a reminder that the most important and controversial legislation is still drafted in secret, behind closed doors, by a handful of senators with little or no input by the rest of the chamber,” Sessions and Lee wrote.

“Most senators are unaware of what’s happening until the secret agreement is dropped on the Senate floor and rushed through final passage with limited debate and zero amendments,” they continued. “Instead of deliberation, senators are allowed only a simple choice: yes or no; take it or leave it.”

Lee and Sessions criticized GOP leadership for failing to uphold promises of regular order and deliberation, and for rushing through the budget deal with little time for discussion.

“Perhaps most troubling, any senator who criticizes this process is caricatured by our own side as calling for a government shutdown or debt default, even though such accusations are patently false,” the senators wrote.

Specifically, the budget plan addresses government spending for two years and raises the spending caps by $80 billion, split equally between defense and non-defense spending. It also shifts money from the Social Security Trust Fund to the Disability Insurance Trust Fund and suspends the debt limit until March 2017.

Conservatives have come out in opposition to the deal, in part because of how it was crafted. Those members, including Lee and Sessions, argue that the plan was crafted in secret and behind closed doors. Such a process, they say, eliminates the opportunity for debate and amendments.

The House is scheduled to vote on the budget deal this evening, with the Senate expected to follow suit later this week.

Read the letter here and below.

The Senate is broken. It’s been that way for a long time. And it looks like it may never be fixed, at least as long as we remain on our current trajectory.

Admittedly, things have improved since the beginning of the 114th Congress. Our new majority has put the committees back to work, passed a budget, and taken important steps to restore the rules and traditions of the Senate that give every member the right to debate and offer amendments on the floor. We have done much to reverse the dysfunction that characterized the institution for the last seven years. Yet much more needs to be done.

Regrettably, the Bipartisan Budget Act of 2015 serves as a reminder that the most important and controversial legislation is still drafted in secret, behind closed doors, by a handful of senators with little or no input by the rest of the chamber. Most senators are unaware of what’s happening until the secret agreement is dropped on the Senate floor and rushed through to final passage with limited debate and zero amendments. Instead of deliberation, senators are allowed only a simple choice: yes or no; take it or leave it.

This is not how it is supposed to be. And it isn’t how we promised we would run the Senate just last year. We promised then that major legislation would go through committee instead of being drafted in secret and placed on the floor by leadership at the last minute. We promised that bills would be thoroughly debated once they were brought to the floor and that senators would be allowed to offer amendments. And we promised that we would put in a full week’s work from time to time, recognizing that an open and deliberative process isn’t possible if members aren’t around to offer amendments and debate legislation in the first place.

We promised to do these things because they reflect the core values of our party and they represent how the Senate ought to operate. It isn’t a mystery. Following the regular order is how consensus is reached and important legislation is passed. And injecting deliberation and consensus into our political system is precisely the reason for which the Framers created the Senate in 1787.

Unfortunately, this is not how the process that produced the debt deal worked. It was crafted in secret without the involvement of the vast majority of our Conference. It was unveiled at the last minute shortly before midnight just one week before we are set to hit the debt ceiling. Furthermore, no amendments will be allowed and cloture will be filed immediately after the bill is placed on the floor in order to force the bill through the Senate as quickly as possible. Perhaps most troubling, any senator who criticizes this process is caricatured by our own side as calling for a government shutdown or debt default, even though such accusations are patently false.

Everyone is quick to acknowledge that the situation in which we find ourselves is not ideal. But we are told that it is the best that we can expect given the circumstances. We are told that we have run out of time, even though we’ve seen this coming for months now. Put simply, we are told that we can’t do better. But we have done better. Just four years ago we forced the president and Senate Democrats to agree to the Budget Control Act of 2011 in exchange for raising the debt ceiling. That legislation increased the amount of we can borrow in exchange for $2.1 trillion in spending cuts. We were able to win this concession from the other side despite having only 45 members in the Senate and a much smaller majority in the House. Today, we have a 54-seat majority in the Senate and the largest House majority since 1930, but somehow we have no choice but to roll back these spending cuts and to increase the debt ceiling without any offsets. We cannot expect things to be any different in the future unless we make a conscious decision to change the way we do business here in the Senate.

To that end, we ask that our colleagues join us in opposing this deal and the non-transparent process used to produce it, and calling on our leadership to run the Senate as we promised the American people we would by allowing a fulsome debate and open amendment process.