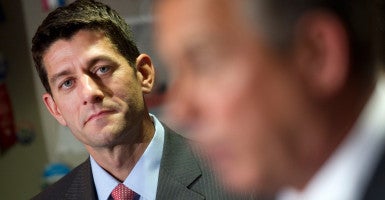 "What has been produced will go a long way toward relieving the uncertainty hanging over us, and that’s why I intend to support it," said Rep. Paul Ryan of the Boehner-Obama budget deal.

Rep. Paul Ryan, the leading candidate to be the next House speaker, announced today he will support the budget deal negotiated by Speaker John Boehner and President Barack Obama.

Ryan’s announcement comes a day after he criticized Boehner and Obama’s backroom dealmaking, which led to the spending package. In addition to raising the $18.1 trillion debt limit, the Boehner-Obama plan boosts government spending by $80 billion above the caps agreed to in 2011.

“What I’ve heard from members over the last two weeks is a desire to wipe the slate clean, put in place a process that builds trust, and start focusing on big ideas,” Ryan said in a statement, adding:

What has been produced will go a long way toward relieving the uncertainty hanging over us, and that’s why I intend to support it. It’s time for us to turn the page on the last few years and get to work on a bold agenda that we can take to the American people.

Ryan will go before fellow Republican lawmakers Wednesday in a closed-door session to vote for speaker candidates. He faces Rep. Daniel Webster, R-Fla., who will have the backing of many House Freedom Caucus members—at least Wednesday if not during Thursday’s floor vote.

One of those Freedom Caucus members, Rep. Mark Meadows, R-N.C., urged both candidates to oppose the deal. Webster announced his opposition to it Wednesday.

“I call on all candidates running for speaker of the House to oppose this legislation and go on record showing they do not support this approach to governing,” Meadows said in a statement. “Now is the time to demonstrate real leadership by committing to ending the culture of governing by crises and to no longer allow the few to make the decisions for the many.”

The 39-member Freedom Caucus as a group will oppose the Boehner-Obama budget deal when it reaches the House floor.

“The latest budget deal continues the sad pattern of the past five years: a fiscal monstrosity gets negotiated in secret with Obama, Reid, and Pelosi; the American people and their representatives get shut out of the process; and the bill is rushed through the House on short notice and without proper scrutiny or the ability to offer amendments,” the group said in a statement.

It’s not clear how many of those Freedom Caucus members will hold Ryan accountable for supporting the deal, however. Rep. Jim Jordan, R-Ohio, told The Daily Signal he doesn’t blame Ryan for the deal and still would support him as speaker during Thursday’s vote before the full House of Representatives.