Lois Lerner Won’t Be Facing Criminal Charges. Here Are the Problems With the ‘Investigation’ That Cleared Her. 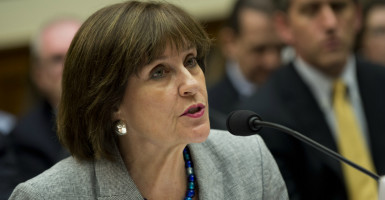 In an eight-page letter last week to the Judiciary Committee of the U.S. House of Representatives, the Justice Department informed Chairman Bob Goodlatte, R-Va., that it was closing its investigation of the IRS targeting scandal, claiming there is not sufficient evidence to “seek any criminal charges” against Lois Lerner or any other IRS officials.

However, there were some key omissions in the letter that will continue to raise questions over the credibility of the investigation and its conclusion.

Indeed, the letter admits that the IRS “mishandled the processing of tax-exempt applications in a manner that disproportionately impacted applicants affiliated with the Tea Party and similar groups, leaving the appearance the IRS’s conduct was motivated by political, discriminatory, corrupt, or other inappropriate motive.”  However, according to Kadzik, “ineffective” or “poor management is not a crime.”

Kadzik says that what happened is “disquieting” and may “necessitate corrective action.”  But criminal prosecution would require the Justice Department to prove that an “IRS official intentionally discriminated against an applicant based upon viewpoint.”  Such “viewpoint discrimination” may violate a number of civil rights statutes as well provisions of the tax code.  Kadzik claims that proof that an “IRS employee acted because of mistake, bad judgment, ignorance, inertia, or even negligence would be insufficient to support a criminal charge.”

Kadzik may be correct in his analysis of the applicable law. But in his recitation of the many witnesses investigators interviewed and all of the IRS documents they reviewed, Kadzik never really gives a credible explanation of why the IRS developed the criteria it used to identify the organizations targeted for increased scrutiny. As originally reported by the Treasury Department’s inspector general, and as Kadzik admits in his letter, those criteria were clearly based on the specific politics of conservative groups, particularly Tea Party organizations, who used words like “Patriots” in their applications.

Kadzik claims that no IRS employee, including some witnesses who self-identified as supposedly “politically conservative,” reported any allegation that the mishandling of these conservative organizations was “motivated by political bias, discriminatory intent, or corruption.” The explanation Kadzik provides for organizations being targeted that were clearly conservative in their political outlook was a desire by IRS employees “to treat similar applications consistently and avoid making incorrect decisions.” If that is so, then why weren’t applications from liberal advocacy organizations, whose only difference was their political outlook, not their basic tax or organizational structure, also targeted to be “consistent?”

Kadzik says they found no evidence that Lerner’s personal political views, which he describes in the personal emails the FBI examined, influenced her behavior. In fact, he compliments her, saying she tried to stop what was happening as soon as she “became fully aware of” it.

But then, we don’t really know what her actual explanation is for what happened, how it happened, or why it happened, because she refused to answer any questions from the House committee investigating the matter. All we have are Kadzik’s conclusions about why it happened—mismanagement, lack of guidance, ignorance—without any recitation of the actual evidence that was gathered from which to draw our own conclusions.

Moreover, the Justice Department refused to enforce the contempt citation issued against Lois Lerner by the House for refusing to answer those questions. As previously explained, Lerner waived her ability to assert her Fifth Amendment right when she gave an extensive statement to the Justice Department. In this letter, Kadzik admits that Lerner voluntarily submitted to a 12-hour interview without any immunity agreement or promise of non-prosecution. Therefore, the decision by the former U.S. Attorney for the District of Columbia this past March, when he refused to present the contempt citation to a federal grand jury was legally and factually wrong. But there is no mention of this in Kadzik’s letter.

Of course, there is also another glaring omission in Kadzik’s letter. He says that neither Lerner nor any other IRS officials had the requisite criminal intent to be charged with violating several civil rights statutes and tax code provisions. However, he entirely fails to mention the potential applicability of 26 USC §6103, which strictly protects the confidentiality of taxpayer records, even from disclosure to federal law enforcement agencies.

It has been revealed that there was a 2010 meeting between Lois Lerner, the FBI, and the Public Integrity Section (both of which helped conduct the investigation that Kadzik is summarizing), where Lerner was trying to persuade Justice Department to open up criminal investigations of these advocacy organizations, even though she had no specific information that any taxpayers had violated any federal tax provisions.  During that meeting, Lerner knowingly gave the FBI—in violation of §6103—21 disks containing over a million pages of highly confidential tax information. The pages included information from 2007 to 2010 on 113,000 tax returns of non-profit organizations.

Given the “politicization [that] continues to go unchecked by this administration,” Rep. Goodlatte criticized the Justice Department’s decision.  According to Goodlatte, administration officials repeatedly undermined the investigation, leaking information last year—before the investigation was even complete—that no criminal charges would be filed. He condemned former Attorney General Eric Holder for refusing to appoint a special counsel to investigate this matter, an especially relevant point given the prior interactions between Lerner and the FBI and Public Integrity Section.

Goodlatte has promised that this decision will be a major issue in the Judiciary Committee’s coming oversight hearing with Attorney General Loretta Lynch, so perhaps we have not heard the last word on this scandal.