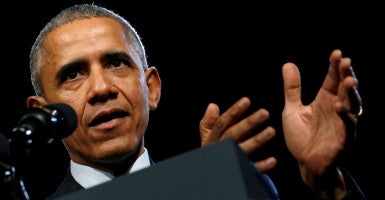 Democrats used an accounting trick with the Affordable Care Act in an effort to generate a budget score that didn't increase the deficit. (Photo: Jonathan Ernst/Reuters/Newscom)

Two conservative lawmakers are accusing Republican leaders of using an accounting gimmick in their budget deal—a “trick” that mimics a tactic Democrats employed to pass Obamacare.

Sen. Jeff Sessions and Rep. Mo Brooks call it a practice in double-counting to produce a better budget score. Democrats did the same thing with the Affordable Care Act in an effort to generate a budget score that didn’t increase the deficit, the two Alabama Republicans claim.

During the Obamacare debate, Democrats argued about $500 billion would be used for two things—shoring up Medicare and covering the cost of the new health care law. “Of course,” say Sessions and Brooks, “the same dollar cannot be spent in two different places.”

The Boehner-Obama budget deal would increase the debt limit by $1.5 trillion to an estimated $19.6 trillion. It also boosts spending by $80 billion beyond spending caps set in 2011.

In an effort to offset that spending, congressional leaders have pointed to future savings in the Social Security disability program. But according to Sessions and Brooks, those “reforms” aren’t actually going to save any money in the future because they’re being spent today on federal government agencies.

“This is not ‘entitlement reform,’ this is an accounting gimmick: any savings to be captured in the future from disability insurance are being spent instantly, today, on boosting bureaucratic budgets for federal departments like the [Environmental Protection Agency] and the Department of Labor—making government bigger and more expensive,” Sessions and Brooks say.

Paul Winfree, director of the Roe Institute for Economic Policy Studies at The Heritage Foundation, agrees. “They’re double counting the savings to Social Security,” he says.

And it’s not just conservatives who are pointing out the maneuver. Maya MacGuineas, president of the Committee for a Responsible Federal Budget, criticized the Boehner-Obama budget deal for having too many gimmicks.

“[T]he bill uses a pension smoothing gimmick that is little more than a timing shift and double-counts the small savings from Social Security Disability Insurance both toward sequester relief and toward improving the solvency of its trust fund,” MacGuineas says.

That’s not all, say Sessions and Brooks: “Another accounting trick is removing today’s spending limits and then counting savings from new spending limits that are supposed to be put in place a decade from now.”

The budget deal was approved by the House on a 266-167 vote Wednesday. It moves to the Senate next, where Sen. Rand Paul, R-Ky., has vowed to filibuster the measure.