The Boehner-Obama Budget Deal Explained in One Chart 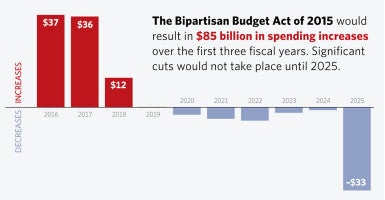 Washington is addicted to spending.

The most recent embodiment of this fact is the Bipartisan Budget Act of 2015. The deal, agreed to by House Speaker John Boehner and President Barack Obama, increases spending (including debt service and offsets) by $85 billion over the next three years. Nearly half of those offsets (including new revenues) are not realized until 2025—the last year of the budget window.

Between this Boehner-Obama deal and the Ryan-Murray spending agreement of 2013 (the last time Congress revisited the discretionary spending caps), Congress has increased spending by a total of $143 billion before 2021 (the period covered by the Budget Control Act) paid for with $98 billion in savings not realized until after 2021.

As we know from past experience, these “savings” sometimes never materialize because they’re so far into the future.

Rather than taking meaningful steps to address the growing debt, the Boehner-Obama deal is a colossal step in the opposite direction. This deal does nothing to reduce the size or scope of government over any period of time.