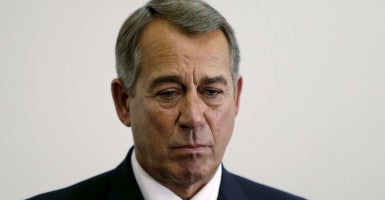 Speaker John Boehner stepped to the podium this morning to proclaim that he listened to the American people when crafting his budget deal with President Barack Obama.

56% of Americans would shut down the government to achieve spending cuts.

But according to a new Associated Press-GfK poll, the American people are on the opposite side of Boehner when it comes to the debt limit and spending. A majority of those polled, 61 percent, either oppose a debt limit increase or want Congress to cut spending in tandem.

There’s even a majority of Americans who would shut down the government to achieve spending cuts.

Here are the key numbers in the poll:

The Obama-Boehner deal would boost the $18.1-trillion debt ceiling by at least $1.5 trillion. It also increases spending by an estimated $80 billion, busting the budget caps put in place in 2011.

AP-GfK released the topline data from the poll. Here’s a closer look at the debt limit question: