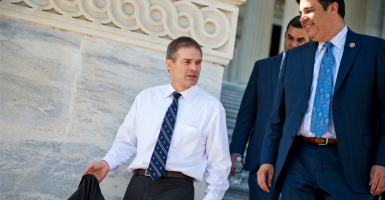 Rep. Jim Jordan, chairman of the conservative House Freedom Caucus, bashed a bipartisan budget deal struck Monday, criticizing both the “bad” substance of the package and the secretive way in which it was negotiated.

But Jordan, in a sit-down interview with The Daily Signal in his office Tuesday, made clear he blames outgoing Speaker John Boehner for the budget deal, not Rep. Paul Ryan, who is expected to be elected to replace Boehner on Thursday.

“It’s a bad deal,” Jordan, R-Ohio, said, declaring his opposition before he was asked the question.

“It was done in a process that was bad, and the product is not good. You can’t throw together this kind of package—$1.5 trillion in new borrowing authority, breaking the spending caps, and then paying for most of this in the out years. That is not the way we are supposed to be handling things around here if we are going to address the $18-trillion debt problem we have. It’s just not the way you want to do business.”

Ryan, R-Wis., the favorite to become the next House speaker, similarly rebuked the process by which the deal was made, telling reporters Tuesday that the “process stinks” and that “under new management, we are not going to run the House this way.”

“I think Paul is right,” Jordan said. “The process does stink, and we all know it. That’s one of the reasons I oppose the deal, and I think the vast majority of Freedom Caucus members will vote no as well.”

Ryan is in an awkward spot on the budget deal because part of Boehner’s motivation in ushering an agreement through now is that it will make Ryan’s life easier as speaker.

In addition, Ryan and Sen. Patty Murray, D-Wash., reached a similar deal in 2013, which increased spending in the short term in exchange for potential future savings.

The new deal lifts budget caps on both defense and domestic programs for two years and raises the nation’s debt limit through March 2017. It was negotiated behind closed doors by Boehner and his staff, Senate leaders, and the White House.

Jordan insists that the two deals are not too similar.

“And Ryan-Murray didn’t have a debt ceiling increase. It did not increase the borrowing authority $1.5 trillion. So, I mean, there are certainly similarities, but there are also some important differences as well.”

“My impression is that a supermajority of the Freedom Caucus has said they are going to support Paul Ryan, and that is going to continue,” said Jordan, who will personally vote for Ryan. “That continues to be the case. And I would expect that to be the case on the floor on Thursday.”

And Jordan is optimistic that Ryan is committed to a new process.

“I am hopeful things will change,” Jordan said. “One of the things we’ve been fighting for as the Freedom Caucus is to change the way we do things so we actually come together early, determine what makes sense, what is consistent with what we told the voters we were trying to accomplish, and then rally around that, pass it, and stand firm. That has to be the new model. And I think that’s the model Chairman Ryan is committed to.”