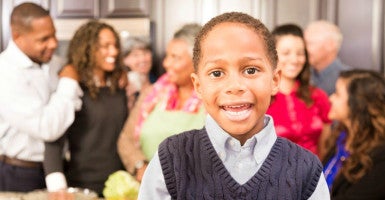 Is there a connection between strong families and a thriving economy? A new study, “Strong Families, Prosperous States,” takes a step toward answering the question.

“Despite the clear economic gains associated with strong families at the individual level, economists across the ideological spectrum have failed to investigate whether strong families increase economic growth,” co-authors Brad Wilcox, Joseph Price, and Robert Lerman write in the report from the American Enterprise Institute and the Institute for Family Studies.

Some of the main findings:

But why do strong families contribute to a thriving economy?

First, marriage leads to higher participation in the workforce and productivity for men.

“Studies reveal that married men work about 400 hours more and make about $16,000 more per year than their otherwise similar single peers, and they are less likely to quit a job without lining up a new one,” the authors write.

The report includes this chart on marital status and income: Although motherhood is linked with a decrease in work and income for women, the gains for married men in these areas tend to offset those decreases.

Marriage provides many other economic benefits, the report says, including income pooling and economies of scale. Married couples also accumulate more wealth than those in other household types, have more assets, and enjoy higher levels of income—and are thus less likely to be poor.

Also, the study says, children from married-parent households are more likely to receive human capital to help them thrive in the world. They have access to greater levels of income and parental attention and are less likely to be abused or neglected.

Finally, strong families reduce the likelihood that youth will participate in delinquent behavior, thus contributing to a lower crime rate.

Wilcox and his colleagues explain that children raised in intact families, particularly boys, are less likely to act out aggressively and that young men from single-mother families are roughly two times as likely to spend time in jail. They note that youth from single-parent homes also are more likely to be victims of crime.

Communities with higher numbers of single-parent homes have greater levels of crime than those with larger numbers of two-parent families. Crime hurts economic prosperity, the authors note, and so stronger families contribute to protecting communities from that economic drag.

Tragically, family breakdown is common in the United States. The rate of unwed childbearing is high, at over 40 percent nationwide.

Divorce rates are at historically high levels, although divorces have leveled off somewhat since the 1980s. Fewer than half of America’s children will be raised by married biological parents for their entire childhood.

These trends will be difficult to change overnight, and there is plenty of work to be done. The authors provide a few recommendations:

The well-being of the family and the economy go hand in hand. America can thrive only if its most vital institution, the family, is strong.

Read more about the link between family and the economy in The Heritage Foundation’s 2015 Index of Culture and Opportunity.