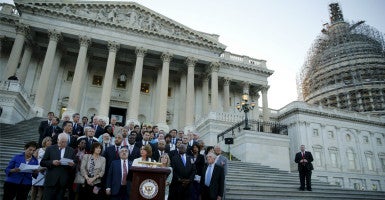 The House passed a discharge motion this evening and will force a vote on legislation reauthorizing the Export-Import Bank later this week. (Photo: Jonathan Ernst/Reuters/Newscom)

The House of Representatives moved one step closer to bringing the Export-Import Bank back from the dead Monday after 62 Republicans teamed up with 184 House Democrats to force a vote to reauthorize the embattled agency.

Despite opposition from the vast majority of Republicans, the House passed a motion to discharge a bill reauthorizing Ex-Im from the Financial Services Committee, 246-177. (See how your member of Congress voted.)

The vote clears a path for the chamber to vote on the legislation sponsored by Rep. Stephen Fincher, R-Tenn. Under Fincher’s legislation, the 81-year-old bank would be reauthorized through 2019. Lawmakers are expected to vote on his bill tomorrow.

Debate on the discharge petition brought fiery statements from lawmakers both opposing and supporting Ex-Im, as conservatives criticized the petition’s language for not allowing any amendments.

“This is not regular order,” said Rep. Mick Mulvaney, R-S.C. “This is shoving something down the American people’s throats.”

“If this is going to come to the floor, every member ought to be allowed to have an amendment, and we ought to reject this discharge petition,” the Texas Republican said.

Hensarling’s committee has jurisdiction over the bank.

Fincher, by contrast, called on his GOP colleagues to join him in support of the discharge petition.

“I ask my colleagues to join me in returning power to the rank-and-file members by voting on the motion to discharge and supporting American jobs,” he said, speaking on the House floor.

Though the majority of House members supported the discharge motion, Fincher’s legislation faces uncertainty in the Senate. Majority Leader Mitch McConnell of Kentucky has stressed that he will not bring a standalone bill reauthorizing Ex-Im to the Senate floor.

At the beginning of the month, 42 Republicans worked with House Minority Leader Steny Hoyer of Maryland and other Democrats to support the discharge petition. The petition received the 218 signatures needed to move the petition forward.

Discharge petitions are rarely successful and can be considered by the House only on the second and fourth Mondays of a month. The process was used last in 2002 to fast-track campaign finance legislation.

If a petition receives the 218 signatures needed and the discharge motion passes the House, legislation—Ex-Im’s reauthorization, in this case—is brought directly to the floor for a vote, bypassing both committees and House leadership.

“Ultimately, it’s about whether a minority of our conference will find common cause with Democrats whenever we have an internal disagreement, use this uncommon, extreme discharge petition process, and force a vote when a majority of the majority does not want a vote,” Hensarling and Sessions wrote.

Ex-Im’s charter expired June 30 after a year of debate among its supporters and opponents.

Those who oppose the bank, like Hensarling, argue that it served as an engine of corporate welfare and cronyism.

By contrast, its supporters believe that Ex-Im helped small businesses compete globally and created jobs in the United States.