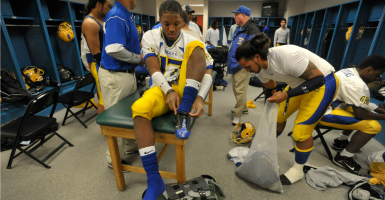 When it comes to locker rooms, does a public school have the right to say it should be restricted to of the students of the same physiological sex?

Right now, a school district north of Chicago is squaring off with the federal government on that question.

Township High School District 211, like many school districts, is wrestling with how to balance the interests of transgender students with the privacy rights of other students. Here’s what the district does to accommodate transgender students, according to a newsletter the school emailed Oct. 12:

However, that’s not good enough for the Department of Education’s Office of Civil Rights (OCR), according to the school district’s newsletter, penned by Superintendent Daniel Cates:

The OCR has taken the position that the district’s decision to not allow unrestricted access to the locker room is inadequate and discriminatory. The OCR has directed that transgender students should have full access to sex-specific locker rooms for changing during physical education classes and after-school activities. Likely litigation and enforcement action, including the potential loss of federal education funds, may be imposed by the OCR.(emphasis mine)

Read that again: a school district is facing the loss of federal funds because they won’t allow a student born the opposite-sex access to a same-sex locker room and now that student has filed a complaint with the Office of Civil Rights.

When I contacted the Office of Civil Rights to confirm the school was representing what the OCR was threatening to do accurately, a spokesman told me “we don’t discuss the details of our investigations,” but didn’t deny the school district’s assessment of the situation.

This is not a situation where a school is turning the other way as a transgender student faces bullying or assault. In fact, the school has instead instituted several policies that should satisfy the interests of transgender students without grossly disrupting the learning environment. What’s left is a very narrow situation relating a time when people are changing in an open room.

In fact, according to a Chicago Tribune editorial published Oct. 19, the school has even floated the idea of a compromise that would allow transgender students access to the locker rooms:

District 211 is willing to provide private dressing stations within its locker rooms—not just one, but six to 10, Cates says. They could be used by any student who is uncomfortable changing clothes in front of anyone else for any reason.

You’d think that would be good enough.

The sticking point is that while they’d be available to all students, they’d be mandatory for one. The district would require the transgender girl to use the stalls. That’s not acceptable to the Office of Civil Rights, which insists on the same rules and accommodations for all students.

The school district met with federal officials Wednesday, but it’s not looking like they’ll change. “We continue to work with OCR in a conscientious attempt to reach a resolution regarding this individual case,” said Tom Peterson, the district’s communications director, in a statement, according to the Daily Herald.

Allowing students to use opposite-sex restrooms and locker rooms would seriously endanger students’ privacy and safety, undermine parental authority, violate religious students’ free exercise rights, and severely impair an environment conducive to learning. These dangers are so clear-cut that a school district allowing such activity would clearly expose itself to tort liability. Consequently, school districts should reject policies that force students to share restrooms and locker rooms with members of the opposite sex.

Didn’t it also used to be the case that if a school district allowed a person with male anatomy to undress in front of a bunch of girls it would be considered unlawful sexual harassment?

But legalities aside … what about common sense? Where is the role for the local authorities, for the school district superintendent, to exercise their own judgment, in light of what they know about the community and the schools, and decide the best way to balance transgender students’ requests with other students’ rights and expectations?

And what about non-transgender students? Sure, I think it’s likely that some of them would have no problem with sharing a locker room with a transgender student. But what about some of the others? What about the adolescents, already embarrassed about their changing bodies, who do feel uncomfortable changing in an open room with someone whose anatomy may not match the gender he or she now identifies with?

Do we really want the federal government to insist that those adolescents’ preferences need to be ignored, overridden?

The national conversation tends to revolve around the wants and preferences of transgender students. But it’s not transgender students, but those who support locker rooms being restricted to those born a particular sex at birth, who are facing the federal government’s bullying right now.