Poll Reveals What Americans Fear the Most: Corruption of Government Officials 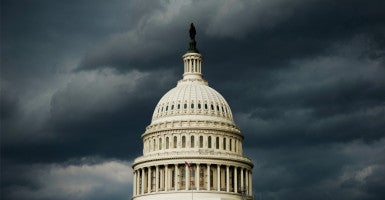 Chapman University in Orange, Calif., recently conducted its second annual survey on fears possessed by Americans in order to pinpoint what Americans fear the most.

The fear that ranked the highest among Americans surveyed was corruption of government officials at 58 percent.

Cyber-terrorism ranked second at 44.8 percent and corporate tracking of personal information was third at 44.6 percent. The top 10 fears found by the poll are listed below: The university reported, “On average, Americans’ fears were the highest in the domains of man-made disasters, such as terrorist attacks, followed by technology and then the government—such as corruption and Obamacare.”

“People often fear what they cannot control,” Dr. Christopher Bader, the survey lead, told the university, “and technology and the future of our economy are two aspects of life that Americans find very unpredictable at the moment.”

Chapman University surveyed respondents on a variety of topics, 88 in total, which ranged from the government to personal anxieties. The report states that the data was then compiled into five basic categories: personal fears, acting out of fear, natural disasters, paranormal fears, and domains of fear.

The “Acting out of Fear” category was added as a new element for this year’s survey. According to the survey, about one-fourth, 22.6 percent, of Americans voted for a specific candidate out of fear and 10.5 percent purchased a gun out of fear.

The strongest relationship in the new category was fear of the government in correlation with buying a gun. The researchers also found that activities such as sending children to private schools and investing in a home security system were based on fear.

Fifty-five percent of those surveyed fear they “will experience a natural or manmade disaster,” and 86 percent believe a 72-hour emergency kit would help their chances of survival in the wake of an event. However, 72 percent of respondents have not tried to compile an emergency kit.

Survey researcher Dr. Ann Gordon told the university, “The number one excuse given by Americans for not owning an emergency kit is that they expect first responders to come to their aid immediately—this is an unrealistic belief in the wake of a natural disaster.”

The survey also revealed that a number of respondents believe in the paranormal world. In fact, 41.4 percent believe places can be haunted by spirits and 20.3 percent believe “aliens visited Earth in our ancient past.”

Respondents with the largest amount of belief in paranormal activity possessed these traits: low levels of church attendance, non-white, Catholic, no college degree, female, unmarried and living in the Northeast.

The survey used a random sample consisting of 1,541 English-speaking Americans over the age of 18. According to the report, “the sample of the Chapman University Survey of American Fears mirrors the demographic characteristics of the U.S. Census.”