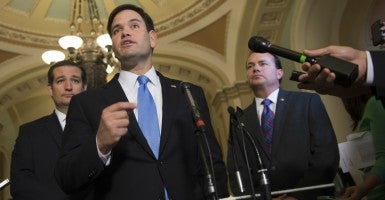 Sens. Ted Cruz, R-Texas, Mike Lee, R-Utah, and Marco Rubio R-Fla., issued a joint statement calling for H.R. 3762, the current reconciliation bill in the House of Representatives, to be amended to include a full repeal of Obamacare. (Photo: UPI/Kevin Dietsch/Newscom)

Three influential Republican senators are vowing to vote against a House bill that partially repeals the Affordable Care Act, dealing a blow to the measure.

“On Friday the House of Representatives is set to vote on a reconciliation bill that repeals only parts of Obamacare. This simply isn’t good enough,” Sens. Mike Lee, R-Utah; Ted Cruz, R-Texas; and Marco Rubio, R-Fla., said in a joint statement. The senators want the Republican-led Congress to send a bill to President Barack Obama’s desk that fully repeals Obamacare.

Reconciliation is a budget process that allows bills to be passed with a simple majority of 51 votes in the Senate. The current House version repeals pieces of the Affordable Care Act, including the employer mandate, the individual mandate, the medical device tax, and the Cadillac tax.

The current reconciliation bill the House is considering also includes a provision that puts a one-year moratorium on federal funding for Planned Parenthood. Three Republicans, Sen. Mark Kirk, R-Ill.; Sen. Susan Collins, R-Maine; and Sen. Lisa Murkowski, R-Alaska, have come out against defunding Planned Parenthood. If those senators stay true to their word, this leaves Republicans with 48 votes in the Senate, short of the 51 needed to pass the bill.

Conservatives, including Lee, Cruz, and Rubio, believe that the bill falls short of their promise to completely repeal Obama’s health care law. In a statement, they said:

Each of us campaigned on a promise to fully repeal Obamacare and a reconciliation bill is the best way to send such legislation to President Obama’s desk. If this bill cannot be amended so that it fully repeals Obamacare pursuant to Senate rules, we cannot support this bill. With millions of Americans now getting health premium increase notices in the mail, we owe our constituents nothing less.

Earlier today, the House Rules Committee amended the measure to remove a problematic provision that the Senate parliamentarian warned would make the legislation dead on arrival in the upper chamber. The committee has not yet responded to calls to fully repeal the Affordable Care Act.

The White House issued a veto threat last night, warning that the bill would “take away critical benefits and health care coverage from hard-working middle-class families.”