Seattle Voted to Hike the Minimum Wage to $15 an Hour. Here’s What Happened to Seattle’s Job Market. 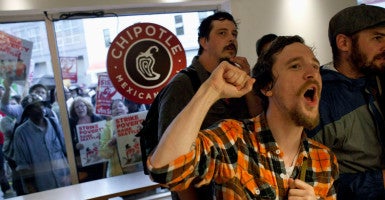 Stephen Baldwin shouts inside Chipotle Mexican Grill during a strike aimed at the fast-food industry and the minimum wage in Seattle, Washington, Aug. 29, 2013. (David Ryder/Reuters/Newscom)

The $15 minimum wage increase in the Seattle area “is getting off to a pretty bad start,” according to a new report.

Data shows that the Seattle Metropolitan Statistical Area (MSA) lost 700 restaurant jobs from January to September of this year, and a report from the American Enterprise Institute suggests that this could be the product of adverse effects of minimum wage hikes on restaurant jobs.

“What is also noteworthy about the loss of Seattle restaurant jobs this year is the fact that restaurant employment in the rest of Washington state is booming this year,” writes Mark Perry, an AEI scholar and professor of economics and finance at the University of Michigan’s Flint campus.

A report by Perry, published Wednesday on AEI’s public policy blog Carpe Diem, notes that there has been an increase of 5,800 new restaurant job positions in the rest of the state of Washington.

While the overall job growth rate this year for the Seattle MSA is higher than the national average, the drop in restaurant jobs stands out. The past three years have seen restaurant employment in the Seattle MSA area at an average job gain of almost 4,000 employees during January-September, according to Perry’s work.

“One likely cause of the stagnation and decline of Seattle area restaurant jobs this year is the increase in the city’s minimum wage,” Perry wrote.

The Seattle City Council passed a $15 minimum wage ordinance that is currently being phased in. On April 1, the minimum wage jumped to $11 per hour.

But correlation does not necessarily mean causation.

Salim Furth, a research fellow in macroeconomics at The Heritage Foundation, points out that the data numbers are for a metropolitan statistical area. The data includes 600,000 people who live in Seattle and 3 million people who live in cities and suburbs that aren’t affected by the Seattle minimum wage ordinance.

“It’s too soon to tell for sure, but there is already some preliminary evidence that the recent minimum wage hike to $11 an hour, along with the pending increase of an additional $4 an hour by 2017 for some businesses, has started having a negative effect on restaurant jobs in the greater Seattle area,” Perry wrote.

James Sherk, research fellow in labor economics at The Heritage Foundation, notes to The Daily Signal that the AEI data is suggestive evidence but by itself does not prove that the minimum wage caused the drop in jobs.

Sherk says the United States does not have much historical experience with high minimum wages, “but what we have is bad.”

For example, in American Samoa (a Pacific island chain that is a United States territory), a $7.25 minimum wage increase was applied in 2007 by Congress.

“This would be the economic equivalent of raising the minimum wage to $20.00 an hour in the continental U.S.,” Sherk’s research states.

“American Samoans have a largely separate economy and considerably lower incomes than residents of the continental United States.”

According to Sherk, the American Samoa tuna canning industry minimum wage stood at $3.26 per hour in the beginning of 2007.

After wage hikes started to apply, canned tuna industry employers began to lay off and cut hours of employees. One cannery shut down in 2009.