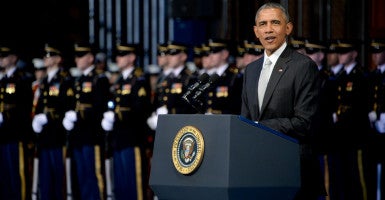 President Barack Obama used his veto pen Thursday in a rare rejection of an annual defense bill during a publicized photo-op event in the Oval Office.

The president’s consequential veto of the $612-billion National Defense Authorization Act will face a Republican-led override attempt in the House Nov. 5, though it is uncertain whether the GOP can coalesce the support needed to overcome Democratic opposition.

While the bill has historically passed with support from both parties, the administration argued that this year’s version used a “slush fund tactic” to add $38 billion into a military account that skirts budget caps.

Obama additionally demanded that any increases in defense spending must match increases in non-defense domestic spending.

The stipulation ignited brash condemnation from Republicans who accused the president of inappropriately using NDAA to impact the ongoing budget fight, noting the bill solely authorizes budget and policy priorities for the military without appropriating money.

“At a time when the world is not a safe place, and it’s not getting safer by any means, the president is using the defense budget, using our military, as leverage for his domestic priorities,” said Justin Johnson, a senior defense expert at The Heritage Foundation.

NDAA has been vetoed only four times since its creation more than 50 years ago, not including Obama’s veto. Johnson said Obama’s rejection is historic because it is the first time a president has rejected the defense measure over a provision outside the bill’s reach, citing the president’s push for non-defense spending.

The legislation received bipartisan support in both houses of Congress, passing through the House 270-156 and the Senate 70-27. But House members face an uphill battle to secure the 20 additional votes required to override the president’s veto—a challenge further complicated by a handful of Democrats who have vowed to switch their position.

Johnson said if NDAA fails to survive a veto override, the bill will go into “limbo” until overarching budget negotiations are settled, delaying military programs and important authorities granted to the president under the legislation.

This is the fifth time Obama has asserted his veto power since taking office and the third this year, following a rejection of Keystone XL Pipeline approval and a bill pertaining to the National Labor Relations Board.