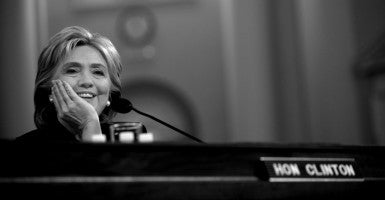 In a much-anticipated hearing, former Secretary of State Hillary Clinton appeared Thursday before a panel of lawmakers tasked with investigating the 2012 terrorist attacks in Benghazi, Libya.

Clinton, who was secretary of state at the time of the attacks and resigned five months after, testified before the House Select Committee on Benghazi in an 11-hour hearing—the fourth public hearing since the committee’s inception in May 2014.

For the last 17 months, the committee has been conducting an investigation into the Sept. 11, 2012, attacks on the U.S. consulate in Benghazi, Libya, that left four Americans dead, including U.S. Ambassador Chris Stevens.

The committee has conducted 54 interviews with a number of administration officials, as well as those who worked closely with Clinton, including Huma Abedin, her closest aide, and Cheryl Mills, Clinton’s former chief of staff.

In speaking with reporters after the marathon hearing, Rep. Trey Gowdy, R-S.C., who chairs the panel, said he wasn’t sure Clinton revealed information that hadn’t been volunteered in past hearings. However, in the months since the committee was formed, lawmakers have learned that the former secretary of state and senator from New York operated a private email server from her home and used a private email address to conduct official business.

Additionally, responding to a request from the Select Committee on Benghazi, the State Department released more than 7,000 pages of emails from Stevens this month. The committee’s request was the first time a congressional panel investigating the attacks has asked the State Department for his messages.

Still, Rep. Elijah Cummings, D-Md., the committee’s ranking member, said the committee has not uncovered any new information that the Accountability Review Board hadn’t learned in its own independent review and criticized Republicans for spending $4.8 million on the committee’s efforts.

It was a point his Democratic colleagues agreed with.

Here are the top six moments from Clinton’s testimony.

1) As demonstrated by Rep. Susan Brooks, R-Ind., Clinton sent far fewer emails regarding events in Libya in 2012 than she did in 2011. According to Brooks, this demonstrated a diminished interest in the climate in Libya during the year Stevens was murdered.

Clinton, in responding to Brooks’ line of questioning, said she conducted the bulk of her work offline, participating in meeting at the White House, taking phone calls to learn of events taking place in the country in 2012, and reading memos that contained classified information.

“There were a lot of things that happened that I was aware of and that I was reacting to,” Clinton said. “If you were to be in my office in the State Department, I didn’t have a computer, I did not do the vast majority of my work on email.”

2) Rep. Mike Pompeo, R-Kan., analyzed the number of security requests Stevens made in 2012 and found there to be more than 600. However, as discussed in an exchange between Pompeo and Clinton, none of his requests landed on Clinton’s desk.

By contrast, Pompeo pointed out, more than 180 emails sent by Sidney Blumenthal, Clinton’s close personal friend, to the former secretary of state, were sent directly to Clinton’s personal email address.

Clinton previously told Rep. Lynn Westmoreland, R-Ga., that Stevens did not have her email address, though he, too, was a friend.

“With respect to security, [Stevens] took the requests where they belong,” Clinton said of Stevens’ security requests going to the appropriate people within the State Department.

3) In the same line of questioning, Pompeo questioned why no officials at the State Department involved in the decision-making in Libya were held accountable for the security failures there.

Though the Accountability Review Board, which conducted its own independent investigation into the attacks, identified State Department employees who did not “carry out their responsibilities adequately,” it also found that there was no “breach of duty,” Clinton said.

“It is my position that in the absence of finding dereliction or breach of duty, there could not be immediate action taken, but there was a process immediately instituted and which led to decisions being made,” Clinton said.

Pompeo, though, noted that State Department employees received back pay and were kept on the payroll.

“The folks in Kansas don’t think that is accountability,” he said.

4. In a tense exchange between Rep. Jim Jordan, R-Ohio, and Clinton, he displayed emails recovered from Clinton’s personal account showing she was aware that the attacks on both the consulate and CIA annex were, indeed, terrorist attacks.

In a message exchanged with her family, Clinton said those killed were murdered by members of al-Qaeda.

Clinton and other members of the Obama administration, though, initially said the attacks were in response to an anti-Islam YouTube video.

“You tell the American people one thing,” Jordan said. “You tell your family an entirely different story.”

Additionally, Jordan also read emails from Clinton that reveal she also told the Egyptian prime minister that the attacks were not a reaction to the YouTube video.

“We know the attack in Libya had nothing to do with the film,” Jordan read. “It was a planned attack. Not a protest.’”

In response, Clinton admitted that she was responding to others who tried to justify the attacks as a reaction to the video and noted that events were occurring very quickly.

“Well, Congressman, there was a lot of conflicting information that we were trying to make sense of,” Clinton said. “The situation was very fluid. It was fast-moving.”

5. During both his first and second rounds of questioning, Rep. Peter Roskam, R-Ill., discussed Clinton’s role in the U.S.’ decision to intervene in Libya.

Roskam read through a series of emails Clinton exchanged with Blumenthal, in which he encouraged Clinton to appear before cameras and in interviews to discuss Libya’s political transition.

“Let me tell you what I think the Clinton doctrine is,” he said. “I think it’s where an opportunity is seized to turn progress in Libya into a political win for Hillary Rodham Clinton.”

Clinton, though, stressed repeatedly that it was ultimately President Obama who made the decision to intervene and wanted credit to be given to those who crafted the policy on Libya.

Responding to Roskam’s line of questioning, Rep. Adam Smith, D-Wash., chided his Republican colleague for addressing what he said was an irrelevant issue.

“Mr. Roskam’s questions, I found to be the most interesting, basically, I don’t know, it was like he was running for president,” Smith said. “He wanted to debate you on overall Libya policy and why we got in there in the first place. And that’s debatable, and I think you will argue that quite well, but it’s not about the attack on Benghazi.”

6. Responding to further questions from Jordan, Clinton said she still believes the anti-Muslim YouTube video did play some role in fueling the attacks.

“I believe to this day the video played a role,” the former secretary of state told the panel.

“I have been consistent about speaking out about the video from the very first day,” Clinton continued. “I think it is important to look at the totality of what is going on.”

Jordan, though, said statements Clinton made in private differ.

“Privately your story was much different than your public one,” he said. “The video may have impacted other places but in Benghazi it didn’t.”

Responding to Republicans’ questions, Democrats on the panel argued their colleagues across the aisle attempted to push an inaccurate narrative of the events leading up to and during the attacks.

“I think the core theory is this: that you deliberately interfered with security in Benghazi and that resulted in people dying,” Schiff told Clinton. “Notwithstanding how many investigations we’ve had that have found absolutely no merit to that, that is the impression they wish to give.”