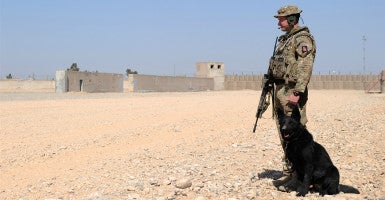 A proposed change to the National Defense Authorization Act would provide free flights home to military service dogs after they complete their tours of duty and potentially reunite them with their human counterparts.

The bill has already passed through the House and Senate and awaits its fate under the tip of President Barack Obama’s pen.

Dr. Robin Ganzert, American Humane Association president, said in an opinion piece for Fox News that the majority of military service dogs are transported back to the U.S. to retire, “but there are cases where military dogs are retired at bases overseas, or left for adoption or euthanasia on foreign soil. While the National Defense Authorization Act for FY 2014 authorized the transfer of a retiring military working dog if no suitable adopter is available at the military facility where the dog is located, the language says ‘may transfer’ rather than ‘shall transfer.’”

Ganzert says congressmen from both parties agree that the United States should endeavor to bring its military working dogs home after their tours of duty.

According to a 2014 article from USA Today, the question raised is one of funding.

It is an “expensive trip” to bring the military service dogs back to the United States, and they also must be accompanied by licensed handlers during transport—which could lead to a shortage of handlers overseas.

According to USA Today, “Army Staff Sgt. James Harrington says the reunion is just as important for the handler as it is for the dog” and that his dog “will help him deal with post-traumatic stress disorder.”

Ganzert mentions the case of Specialist Brent Grommet’s reunion with his military working dog, Matty, in 2014. They helped each other cope with their combat experiences and move forward in life despite the challenges of PTSD.

“They won’t speak of their deployment to others, only to each other,” wrote Ganzert. “But late at night in a nightmare that only those who suffer from the invisible wounds of war understand, Brent gets a nudge from a wet nose to say ‘I’m here and it’s okay.’ And when Matty’s legs twitch and he whimpers, another victim of PTS, it takes a soft word from Brent to let his battle buddy know that it’s all okay.”

“We need to bring them [military working dogs] back to the U.S., the country they were raised in and served for. They need to be retired on U.S. soil and reunited with the soldier that they worked with, because that’s the person that cares most about the dog. It’s a powerful bond they share,” Ganzert told USA Today.