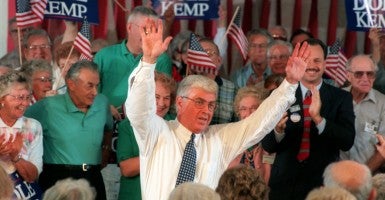 Jack Kemp arrived on the national political scene at a time when America was sinking economically and its spirits were fading.

Against that backdrop, Kemp’s optimism and visionary “big ideas” had the power to transform the nation, as authors Morton Kondracke and Fred Barnes describe in their newly released book, “Jack Kemp: The Bleeding Heart Conservative Who Changed America.”

With his hallmark “audacious” enthusiasm, Kemp championed an optimistic, energetic agenda of opportunity for growth and upward mobility. His earnest commitment to uplift and empower all Americans garnered advocates across the political and socioeconomic spectrum.

As it did 30 years ago, that Kempian vision could have the power today to defeat a political agenda that is based on envy, class warfare, and redistribution, explained Kondracke and Barnes at a recent book presentation at The Heritage Foundation.

Kemp decried a welfare system whose regulations blocked low-income Americans from the key stepping stones to upward mobility. As he wrote in the Wall Street Journal in 1990:

America is not divided immutably into two static classes. But it is separated or divided into two economies. One economy—our mainstream economy—is democratic and capitalist, market-oriented and entrepreneurial. It rewards work, investment, saving and productivity. Incentives abound for productive economic and social behavior. … There is a second economy that is similar in respects to the East European or Third World socialist economies. It functions in a fashion opposite to the mainstream capitalist economy. It predominates in the pockets of poverty throughout urban and rural America. This economy has barriers to productive human and social activity and a virtual absence of economic incentives and rewards.

Kemp also showed that good intentions are not enough and that an anti-poverty agenda should be evaluated not on the basis of how many people are on its rolls, but by how many people have been empowered to rise from dependency.

In his words, “[t]he irony is that the second economy was born of desire to help the poor, alleviate suffering, and provide a basic social safety net. The results were a counterproductive economy. Instead of independence, the second economy led to dependence. In an effort to minimize economic pain, it maximized welfare bureaucracy and social costs.”

Among Kemp’s most ardent fans was one cohort that would not typically be expected to champion a conservative agenda: neighborhood leaders in public housing developments. These grassroots leaders were united in a common effort to be in control of the management of their properties—which had suffered under negligent and opportunistic public housing authorities and had become crime-ridden, drug-plagued virtual war zones of gang factions.

Among the first to promote the efforts of the public housing leaders was Bob Woodson, whose Center for Neighborhood Enterprise was founded to garner support and recognition for grassroots, bottom-up community revitalization. With the meager resources they had, these resident groups launched initiatives to revive hope and breathe new life into their neighborhoods.

Woodson invited then-congressman Kemp to meet with a group of the public housing leaders and hear about what they had done, what they hoped to do, and the obstacles they faced. Bob described the session, with Kemp being “uncharacteristically” in total input mode, frantically scribbling notes to record what he was learning.

Kemp went on to craft legislation that granted residents the right to manage their properties. The bill was signed into law by President Reagan, who was flanked by public housing leaders.

Among those grateful for the crucial support Kemp provided for their efforts was Bertha Gilkey, a public housing leader from St. Louis. In an interview with Morley Safer of 60 Minutes, Gilkey explained that her brand of community revitalization went beyond bricks and mortar: “We didn’t just fix the buildings. We changed the thinking of the people.” When Safer remarked that although the interview was taking place in an open courtyard, he felt safer than he had ever felt before in a public housing project, Gilkey flashed her wide smile and replied, “This is not a project, Morley; it’s a neighborhood.”

In a tribute to Kemp in 2009, Gilkey summed up his impact in vivid terms:

He said public housing people were some of the most resilient. … We took failed businesses, turned them around. We took people off of welfare in large numbers and put them to work. We took gang members out of gangs and made them husbands and fathers and responsible citizens who now are giving back to the communities not taking away from them.