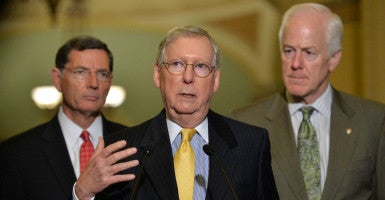 The Senate parliamentarian warned Senate leadership Monday that a House reconciliation bill that rolls back provisions of Obamacare would be dead on arrival in the Senate and not be subject to a 51-vote threshold, The Daily Signal has learned.

A senior Republican Senate aide confirmed to The Daily Signal that Senate Parliamentarian Elizabeth MacDonough told Senate leadership and Budget Committee staff last night that the House reconciliation bill repealing five provisions of Obamacare violates the Byrd Rule, which requires that reconciliation bills have a budgetary effect. As a result, the legislation would be subject to cloture votes at a 60-vote threshold.

Reconciliation bills, which must address budget revenues or spending, can pass with just 51 votes.

In a conversation with top Republican senators, as well as those on the Senate Budget Committee, MacDonough specifically pointed to a provision of the package that would roll back the Independent Payment Advisory Board (IPAB), a 15-member board that addresses Medicare solvency, according to the Republican Senate aide.

According to the aide, MacDonough referenced the previous Senate parliamentarian ruling in 2010 that the Independent Payment Advisory Board violated the Byrd Rule and pointed to that precedent when telling Senate leadership that the reconciliation bill would not pass muster in the Senate.

The reconciliation bill specifically repeals the employer mandate, the individual mandate, the medical device tax, the Independent Payment Advisory Board, and the Cadillac tax. It also places a one-year moratorium on federal funding for Planned Parenthood and rescinds leftover money in the Prevention and Public Health Fund.

Some conservatives had doubts about the viability of the House’s reconciliation bill and warned that the package would likely be subject to points of order from Democrats objecting that it violated the Byrd Rule.

Under the Byrd Rule, senators can object to measures of a reconciliation bill that don’t alter revenues or spending. Senators can push back on the legislation if they feel that it includes “extraneous matter.” If the Senate parliamentarian, currently MacDonough, agrees, the provision in question is stricken from the bill.

Instead of pushing a piecemeal repeal of Obamacare, as the House reconciliation package does, some conservatives are pushing for a one-line repeal of the full law.

“We have warned that a piecemeal approach to repealing the Affordable Care Act would be extremely vulnerable given the constraints of the Byrd Rule,” Paul Winfree, director of the Thomas Roe Institute for Economic Studies at The Heritage Foundation, told The Daily Signal. “It is clear to me that if the House committees were serious about using reconciliation to successfully repeal the Affordable Care Act, the bill would be written very differently. We have consistently argued that to maximize the chance of success, Congress should carefully write a bill that ties all of the components together in a way that changes revenues and direct spending in a meaningful way.”