Washington Sets the Stage for Another Financial Crisis 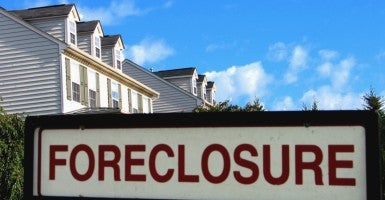 Fannie Mae and Freddi?e Mac are engaged in the same low down payment lending mania of 2004-07. (Photo: Taber Andrew Bain / Flickr/ CC BY 2.0)

My 13-year-old son told me at the dinner table the other day that Franklin Roosevelt was one of America’s “greatest presidents” because “he ended the Great Depression.” He’s usually a good student, so I checked where he got this tripe, and sure enough, the fairy tale was right there in his American history book.

The textbook tells kids that the New Deal ended the Great Depression and even saved capitalism. Of course, the New Deal exacerbated the pain and financial devastation of a stock market crash, and unemployment lingered in double digits for a decade after Roosevelt was elected until the start of World War II.

We get this kind of rampant revisionism because the left writes the history books—which they are doing right now.

Here’s the latest story line: bailouts, trillions of dollars of government spending and debt, easy money, and re-regulation of Wall Street ended the 2008 Great Recession. The myth took on new life last week when Ben Bernanke took a bow in the Wall Street Journal for, in his mind, saving the economy with his $3 trillion of quantitative easing and zero interest rate policy. No, actually, this is what created the crisis. Don’t be surprised if Bernanke receives a Nobel Peace Prize.

As my fellow Heritage colleague Norbert Michel and other scholars have thoroughly documented, the crash of 2008 was caused by government policies and regulatory failure, including easy money policies that flooded the markets with debt. Within a decade, these policies led to preposterous mortgage loans being issued, and massive over-leverage of government, companies, and households.

Now the Fed, the White House, and Congress are recreating the very same conditions for another financial bubble. If it pops, we could replay the same devastating effects as occurred during the first bubble in 1999 and 2000. It is doing so in four ways:

First, the Dodd-Frank regulations are exacerbating one of the greatest consolidations of the banking industry since the Great Depression. Those indispensable small banks, like the one Jimmy Stewart operated in the movie “It’s a Wonderful Life,” are disappearing from the American landscape.

This is largely because big government policies are slanting the system in favor of big banks. Because of this, we have created a competitive advantage that allows the sharks to swallow the minnows. Meanwhile, the “too big to fail” safety net to Bank of America, Citi, and other titans exacerbates this cost advantage of big banks and thus makes bailouts even more likely in the future.

Second, Fannie Mae and Freddie Mac are engaged in the same low down payment lending mania of 2004-07, and the Obama administration is on a Bush-like homeownership push. Fannie and Freddie are again guaranteeing mortgages with as little as 3 percent down payment. Have we learned nothing at all?

Fannie and Freddie are again guaranteeing mortgages with as little as 3 percent down payment. Have we learned nothing at all?

Third, the Fed refused to tighten its stance in September, and, hello, that easy money policy is how we got into the mess in 2000 and then in 2008. Wall Street cheered Janet Yellen’s decision to keep the cheap dollars flowing.

Finally, there is the saturation of debt. When the crisis hit in 2008, the national debt stood at a little under $10 trillion. Now we are over $18 trillion. Government is hopelessly over-leveraged, and the interest rate exposure is enormous. With each one-percentage-point rise in long-term rates, the servicing costs of the debt rises by about $1.8 trillion over ten years.

The point is that government and politicians have no learning curve. All of the conditions of financial wreckage are reappearing. The presidential candidates should start warning voters that Washington is rebuilding another financial house of cards.

If they don’t, when the financial crash comes and Americans see their life savings disappear, the media and the history books will again blame conservatives for the destruction from the rampant financial negligence of government.