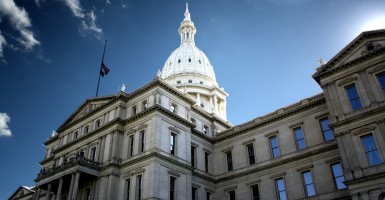 The report aggregates data from 629 local police departments, sheriff’s departments, and multijurisdictional task forces, plus the Michigan State Police. Civil forfeiture is a policy that enables law enforcement authorities to seize property or currency if they suspect it is involved in, or is the result of, a crime.

Since forfeiture proceedings are civil, not criminal, property owners are afforded few due process protections. With no presumption of innocence or right to an attorney, innocent property owners fighting the seizure of their homes and life savings face a legal landscape skewed against them in nearly every way possible.

According to Michigan’s forfeiture report, in 2014, state law enforcement agencies seized and forfeited $23.9 million’s worth of cash and property. That sum includes more than $14 million’s worth of assets forfeited under state law, and an additional $8 million provided to Michigan law enforcement agencies via the federal equitable sharing program.

The real total value of forfeited property is likely higher, since only drug-related forfeitures have to be reported.

Taking into account the cost of running forfeiture operations, Michigan law enforcement netted a cool $20.4 million in revenue, every penny of which they can spend without political oversight and with little accountability—conditions that are ripe for abuse.

Believe it or not, the 12 pages that constitute this year’s forfeiture report are the most detailed look Michiganders and their elected lawmakers get into the world of civil forfeiture.

Here are some of the highlights:

Forty-four point six percent of forfeiture revenues were used for equipment purchases. While much, if not most, of this category may be above-board (bulletproof gear or body cameras, for example), law enforcement agencies around the country have faced criticism for using forfeiture funds to buy all manner of “equipment” ranging from the outlandish (helicopters and armored personnel carriers) to the absurd (margarita machines).

Law enforcement agencies should be generously funded and fully equipped, but the opacity of forfeiture-related purchases makes it impossible to separate the good from the bad.

The report raises as many questions as it purports to answer.

How many property seizures were accompanied by criminal charges and convictions? How much additional forfeiture revenues were generated in cases unrelated to drugs? What equipment is law enforcement buying with its untraced millions? Why are personnel directly financed by forfeiture funds, given the obvious conflict of interest? And why did 56 agencies not file any documentation whatsoever?

Fortunately, answers to these questions may be forthcoming. Last week, the Michigan state Senate unanimously passed a modest reform package that greatly enhances the reporting requirements for law enforcement.

If Gov. Rick Snyder, R-Mich., signs the seven-bill package, Michiganders will finally get to see exactly how often civil forfeiture is accompanied by criminal charges and convictions, and exactly how forfeiture funds are being spent.

The reform package also raises the evidentiary standard in forfeiture cases from a “preponderance of the evidence” to “clear and convincing,” a much more fitting standard, given that what is often at stake are people’s homes and life savings.

Bringing transparency to forfeiture is a small but necessary step toward a system that is more fair and more protective of the rights of innocent property owners.