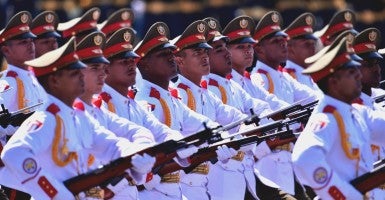 Russia is not the only country that feels free to intervene in Syria on behalf of the Assad regime and attack U.S.-supported Syrian rebels. Cuba and Iran, two countries eagerly courted by the Obama administration that have recently signed controversial diplomatic agreements with the United States, also are deploying troops to join the fight there.

On Wednesday, a U.S. official confirmed to Fox News that Cuban paramilitary and special forces units have been deployed inside Syria, possibly using Russian transport planes after training in Russia.

This is a huge slap in the face of the Obama administration, which bent over backwards to reset bilateral relations with the Communist regime in Cuba. The White House made a series of unilateral concessions, including lifting sanctions, freeing Cuban spies from jail, and prematurely removing Cuba from the State Department’s list of state sponsors of terrorism.

After pocketing these concessions and allowing the U.S. to reopen its embassy in August, the Cubans now feel free to return to their previous role as Moscow’s stalking horse. During the 1970s and 1980s, thousands of Cuban troops were deployed to back revolutionary movements in Africa and Latin America. Roughly 1,500 Cuban troops were even deployed to Syria to support the Syrian army against Israel during the 1973 Arab-Israeli war.

Iran also has quietly expanded its military efforts in Syria. Hundreds of elite troops from the Islamic Revolutionary Guard Corps (IRGC) have been deployed this week to reinforce the several hundred already committed to the fighting. The Iranian Revolutionary Guards have joined an offensive launched by the Syrian army against rebels in northwest Syria near the city of Aleppo, which is backed by Russian air strikes.

Iran also has mobilized thousands of Hezbollah fighters from neighboring Lebanon and Iranian-trained Shiite militias from Iraq, Afghanistan, and Pakistan, which are fighting in western Syria.

Although Russia has declared its intention to defeat ISIS, its air strikes and the current ground offensive are really aimed at destroying more moderate Syrian rebel groups, some of them backed by the United States. Russia and Iran, which have become close allies in Syria, seek to eliminate Western-backed rebel groups and force the United States and its allies to accept the brutal Assad regime as a lesser evil compared to ISIS.

In addition to attacking U.S.-backed Syrian rebel groups, Iran’s radical Islamist regime has flaunted its continued hostility to the United States. On Sunday, Tehran casually announced the conviction of Iranian-American reporter Jason Rezaian on trumped up charges that included espionage, although it did not see fit to provide information on which charges or the details of the resulting sentence.

It is clear that Iran seeks to hold Rezaian and three other innocent Americans as hostages to force the release of 19 Iranians and Iranian-Americans who have been jailed for violating sanctions imposed on Iran.

On Tuesday it launched a new missile, the Emad (“Pillar”), which could eventually be armed with a nuclear warhead. This is a direct challenge to the Obama administration, because it violates U.N. Security Council Resolution 1929, which bans any activity related to ballistic missiles capable of delivering nuclear weapons.

The version it approved requires Iran to comply only on a voluntary and provisional basis, while also banning the inspection of any military site, a provision that contradicts the actual agreement.

Despite the signing of the flawed nuclear deal, it is clear that Iran’s theocratic dictatorship remains a hostile adversary whose actions are raising bilateral tensions with the United States, not relaxing them, as the administration anticipated.

How long will it take for the Obama White House to realize that its fumbling efforts to cultivate better relations with Iran and Cuba have failed as disastrously as its efforts to “reset” bilateral relations with Putin’s Russia?