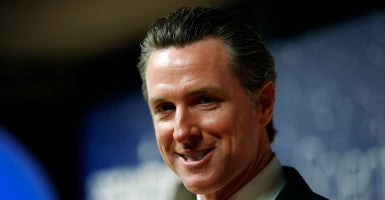 California Lt. Gov. Gavin Newsom announced a new ballot initiative Thursday that would tighten restrictions on ammunition purchases and gun ownership should voters turn out in support of the proposed legislation.

According to the Associated Press, Newsom’s proposal comes in response to national levels of gun violence “and three recent San Francisco Bay Area killings in which the shooters allegedly used stolen guns to commit the crimes.” The Law Center to Prevent Gun Violence has sponsored the initiative.

In a statement provided to The Daily Signal, the National Rifle Association’s Amy Hunter said:

California illustrates the true gun control agenda, which is the ultimate confiscation and banning of firearms. If Gavin Newsom gets his way, the state will be the next Australia. His ballot initiative proposal does nothing but prohibit access to the most effective methods for self-defense, with no measurable positive effect on stopping crime or improving public safety. They can’t repeal the Second Amendment, so they’re trying to chip away our rights until there is nothing left.

Officials from Newsom’s office could not be reached for comment.