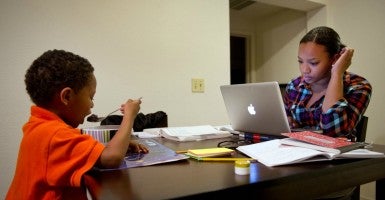 Do parents deserve to be a bigger part of the school system? (Photo: Randy Pench/ZUMA Press/Newscom)

A new Idaho School Board Association resolution reveals that the group wants the Idaho Legislature to “hold at bay any expansion of the parental rights in regard to education.”

The resolution, one of a handful like it passed by the group’s central committee, suggests that parents’ rights might conflict with districts’ attempts to comply with federal or state regulations.

The message from the ISBA came just months after Idaho lawmakers passed House Bill 113a, a measure inserting parental rights into the state code. That legislation was passed by the Idaho House on a 37-31 vote in February and cleared by the Senate on a 27-7 vote in March. Republican Gov. Butch Otter signed the measure into law on April 2.

Among other things, the law affirms parents’ rights to direct the education of their children, view all of their students’ school records, direct a child’s religious training, and make health decisions for offspring.

When the bill first surfaced during the 2014 legislative session, ISBA President Karen Echeverria wondered about the need for new language in the code.

“The Idaho School Boards Association does not understand the need for this,” Echeverria said. “We don’t see that the U.S. Constitution addresses education, so we don’t think that it makes sense to reference it. We frankly don’t understand why this bill is even necessary at all.”

Now, the ISBA is launching an offensive against further expanding the statute.

“The Idaho School Boards Association will maintain a log of incidents that school districts are addressing in working with parents who take exception to various districts’ practices, and will work with the education community to communicate to the Idaho Legislature the impact of the exceptions on district personnel and district budgets, and will work with the Idaho Legislature to hold at bay any expansion of the parental rights in regard to education as outlined in House Bill No. 113a,” the resolution outlines.

The ISBA wording unnerved some parents.

“Our taxpayer money is going to a private trade group that backs the federal government over parents’ rights,” said Middleton’s Tammy Nichols, a mother and education advocate. “And we are having to pay for that.”

Mila Wood of Middleton also blasted ISBA for pushing the plan and wondered if the Middleton School District should spend thousands of dollars a year to participate in the private lobbying group.

“To find out this private trade group wants parents to have less of a voice in their child’s education and privacy protection, it makes me sad,” Wood said. “Would parents in Middleton be proud and happy that our district is using taxpayer money, that could go into classrooms, to fund this group working against them?”

Echeverria has not returned a call for comment on the resolution, which was submitted by the Pocatello-Chubbuck School District. Officials in that district did not respond to email requests for comment.

Nichols said ISBA’s lobbying against a law supporting parental rights gives credence to the measure’s importance. “To me and others, it means they are going to do everything in their power to keep a firm hold on the rights of the parents to express themselves,” she said of the ISBA. “They’ll keep as tight a hold on parents as they can.”