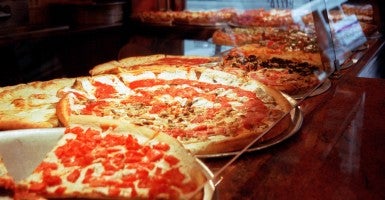 Much of the media today roundly disparage any business-person who even voices his or her religious beliefs regarding same-sex marriage. This is the consistent narrative by which many presumptuously judge small business owners’ (often wedding vendors) motives in affirming their religious convictions as animating their business lives.

Critics reject out of hand their claims that they are simply living out their faith with love and can’t be a part of a wedding ceremony that violates their consciences.

When the owners of Memories Pizza—a small-town pizzeria in Indiana—were posed a hypothetical question about whether they would cater a gay wedding last year, the “intolerance” of their simple response that they would not resulted in a threat to burn down their shop.

They did not answer threats with threats, but continued to calmly explain that they would happily serve gay customers; they just didn’t want to be a part of the wedding. Of course, none of this mattered to those not interested in seeking the facts.

It now appears that a man ordered two pizzas from Memories Pizza, without stating his reasons (as is quite normal when ordering pizza), and brought them back to serve at his same-sex wedding. He recorded the event on video and claimed that Memories “catered” his gay wedding—without knowing it.

While the charade itself is sort of childish, it does hold several lessons for us. Let us first consider that, in response to the video, Memories owner Kevin O’Connor has…

Threatened to burn something down? Nope.

Called someone a bigot? Nope.

He’s actually not really too interested in the actions of his customer after selling him the pizza.

So what’s the point?

It is an undisputed fact that Memories Pizza served a man regardless of his sexual relationships. Its owners did not deny him service. They didn’t “turn him away.” They didn’t quiz the man when he came in, asking whether he identified as a homosexual or what he would use the pizza for.

Those truly seeking to understand the conflicts in the “wedding vendor cases” should study what happened here, for they will see that no one involved is interested in simply turning away customers based on how they identify sexually.

People are interested in exercising the teachings of their faith regarding marriage, and in continuing to live quiet and peaceful lives in harmony with their communities, as they have been doing for years. They haven’t sought a fight; it has come to them.

What else can we learn?

It’s important to note that Kevin O’Connor did not respond in an apoplectic manner with claims of “my conscience was violated here!” Conscience is violated not merely by the occurrence of events; there must be knowledge of what one is getting oneself into or being forced to participate in. It must be emphasized that the wedding vendors around the country who are asserting their religious freedom are doing so because they are knowingly being forced to participate in an act that violates their conscience, not because a customer disagrees with them on matters of sexuality.

Even then, Kevin would have had no problem serving the customer the pizzas even if he knew who he was. “We weren’t catering to their wedding,” Kevin said. “They were picking [pizzas] up.” Kevin has no problem with serving a person in his shop, whether or not that person identifies as gay.

For those who truly care to understand what the wedding vendors are seeking in these cases, there is an important lesson here. Kevin O’Connor’s indifference in this matter can be contrasted with his kind but firm refusal to participate in a same-sex wedding when asked earlier this year.

He is not asking to “turn away” people. He is only asking that he not be forced to violate his conscience by knowingly participating in a wedding ceremony that runs counter to his religious beliefs. Memories Pizza’s unproblematic “catering” of the same-sex wedding in this case shows as much. Those who sincerely care to understand more about such religious freedom claims can learn from Kevin’s actions, which are an important teaching moment on the role of conscience in the “wedding vendor cases” and beyond.

The small business owners involved in these matters are not asking for a “blank check” to do whatever they want. They are advancing sincere conscience claims against being forced to knowingly use their businesses for certain ends, and they are often happy to forgo the lost income and even refer the potential customers to another business where they can find what they need.

As long as we live in a democracy, people will have differing views on moral questions. The model of tolerance displayed by Kevin O’Connor is as good as any for how we can live together with those differences.