There Are Now 340 Sanctuary Cities. Find Out If There’s One Near You. 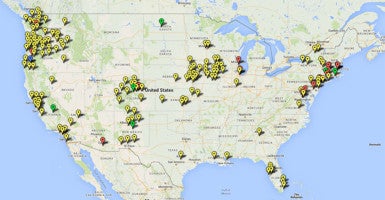 Sanctuary cities are growing in the United States, leading to a spike of 340 jurisdictions that shield undocumented immigrants from federal immigration law.

The Center for Immigration Studies published an interactive map showing the locations of the sanctuaries, revealing scattered pinpoints across the country.

You can view that map here.

Sanctuary policies vary from state to state, but they generally prevent local authorities from cooperating with federal immigration officers, allowing those localities to protect undocumented immigrants from deportation.

Out of the 10 sanctuary jurisdictions that have released the greatest number of illegal immigrants against demands from U.S. Immigration and Customs Enforcement, seven fall in California.

San Francisco is among those cities, discharging 252 detained undocumented immigrants in 2014 despite requests from ICE that local authorities hold them in custody.

Those protections enabled the release of seven-time convicted felon Juan Francisco Lopez-Sanchez, who was previously deported to Mexico five times and went on to murder 32-year-old Kate Steinle on a San Francisco pier.

Hans von Spakovsky, a senior legal fellow at The Heritage Foundation, said it is “outrageous” that these sanctuary policies have “victimized” Americans across the U.S.

“How many preventable murders, rapes, robberies, and assaults have to occur before local officials reverse their reckless sanctuary policies? All they are doing is providing sanctuaries for criminals,” he said.